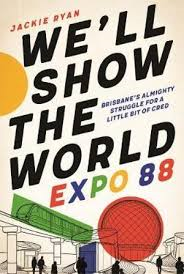 It is so rare to find a non-fiction book that delivers everything you want in terms of information, whilst also having an engaging narrative. Debut author Jackie Ryan has given us such a book in We’ll Show the World Expo 88 (UQP 2018). With a subtitle of ‘Brisbane’s Almighty Struggle for a Little Bit of Cred’, the story pulls us along on a journey of discovery every bit as compelling as a page-turning novel. At the same time, it is almost like a text book, forensic in its examination of the 1988 event that changed Brisbane forever.
Expo 88 was a big, brash party, a child of the eighties for the young at heart. When it was first suggested, everyone thought it would be an economic and social disaster, a ‘Joh Show’ representative of the then-Premier Joh Bjelke-Petersen and his bold ambition. Anxieties over land resumption, site proposals, financial predictions and how the people of Brisbane – and of Australia – would respond, along with the demise or failure of previous World Expositions, polarised this expensive and risky venture. But by the time Expo closed its gates for the last time, it had indeed ‘shown the world’, and people’s fond memories of Expo still live on, 30 years later. Ryan dedicates her book to ‘… the people who objected to it, and the people who loved it … You were all right.’ And this is what her book achieves – it interrogates the whole Expo saga, from beginning to end, from idea to planning to execution, and even to what came afterwards, and it shines a light on the good and the bad, the memorable and the dubious.
In just over 300 pages, Ryan devotes more than 60 pages to annotations, references, a bibliography and an index (and also includes 8 pages of photographs). This book is so well-researched, I would challenge anyone to pick an Expo reference and NOT be able to locate it in the book. And yet because of the way the book is structured – with the references tidied away at the end (and often with amusing or interesting anecdotes attached that you might miss if you read only the main body of the book!) – because of this form, it is not dense or heavy-handed. Ryan’s conversational and humorous tone makes for easy reading, and her ability to focus on the small minutiae of details ensures a captivating dissection of the event and everything associated with it. Through hundreds of source documents, and dozens of interviews with the movers and shakers of the time, Ryan has constructed the ultimate Expo guide – not merely a description of Expo but an intimate investigation into how and why it came about.
Ryan introduces her subject by looking at World Fairs or Expositions more generally, and I found this historical part of the book especially interesting as she describes similar events held around the world from the first official Great Exhibition held in London in 1851. She tracks the changes in form and style of World Fairs over time and investigates the success – or failure – of previous events. Then she provides some background on the Australia of the time, and most particularly Queensland. She summarises the social and cultural norms of the fifties, sixties, seventies and early eighties in the lead-up to Expo, and more importantly, she navigates the political climate, made all the more poignant by the fact that Expo occurred simultaneously with the famous Fitzgerald Inquiry into corruption in this state; the two events could hardly have been more different, and yet both were powerful instruments for change in Queensland, and it could be said that one couldn’t have happened without the other, or at least that they fed off each other in some sort of strange, symbiotic relationship. Certainly, if you speak to a Queenslander who was around in the eighties, those are the two major events that seem to spark significant memories, both good and bad. Ryan goes on to describe the how and why of Expo – how it happened, why it mattered – and finishes with a look at the legacy of Expo, and what it meant for a changing Brisbane.
Expo 88 attracted everyone from celebrities, royalty and politicians to average householders with a season pass. As a Bicentennial event, it drew protests from Indigenous people, and as a huge exercise in inner-city land resumption, it drew the ire of local residents. But it also became ‘A colourful 1980’s amalgam of cultural precinct, theme park, travelogue, shopping mall, and rock concert …’, catering to over 18 million visits during its six-month run. To a Brisbane that closed its doors at noon on Saturdays, Expo offered entertainment, shopping and eating options from 10am to 10 pm, seven days a week. ‘Through night parades, the Acquacade, smoke machines, and laser beams, Expo held the people of Brisbane enthralled.’ Anyone who initially feared that Expo would be a parochial and humdrum affair was certainly proved wrong, and despite a rather rocky beginning, some shady dealings and a lot of angst, Expo ‘came to mean so much to so many’.
For all its ambition and showiness, despite all the detractors and obstacles and protestors, Expo 88 was a ‘coming of age’ for Brisbane, a giant party that left lasting memories for those of us who participated, a lasting physical legacy in the form of South Bank Parklands, and lasting socio-political and cultural change for our city. This book pays homage to everything Expo in a remarkable trip down memory lane, and along the way it unearths some fascinating facts and trivia about behind-the-scenes dealings, the people in power, the acts and entertainment and icons we came to love, the near-disasters that almost occurred, and the once-in-a-lifetime surprises that did.