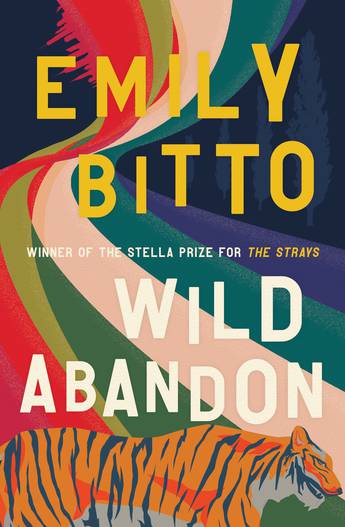 There are so many wonderful aspects to Emily Bitto’s novel Wild Abandon (Allen and Unwin 2021). She is a writer in complete control of her words and of the story. Every sentence is carefully crafted. This is a novel about endangered wildlife, capitalism, war, betrayal, grief and loneliness.

Set in 2011, young Will leaves Australia on a whim after a bad break-up. He first heads to New York City, where he vows to say yes to any and every opportunity that comes his way. His experiences are diverse, dangerous and emotional. He then heads to the mid-west and comes to work on the property of an exotic animal collector. The tigers, lions, bears and wolves are as magical and wondrous to him as any fantasy; he cannot believe his life now consists of bottle-feeding lion cubs and tending to full-grown tigers. But Wayne, the owner of the property, has had a traumatic past and is living a life filled with simmering violence and unresolved guilt and fear. Will is caught up in a catastrophic and cataclysmic situation which we know will not end well, but from which we cannot turn away.

Wild Abandon ‘offers us startling and profound visions of the world and our place in it’, and so it does, forcing the reader to consider a raft of issues around climate change and the keeping of wild animals, war and its traumatic legacy, personal responsibility, love and betrayal, and the theory of adventure. Bitto is an extremely skilled writer and the book is a tour de force of both story and emotion.

Despite all of this, and although I began this book expecting and wanting to love it, I struggled to engage, particularly with the first half of the novel set in New York. In fact, to me it almost felt like two books; I feel that the second half, focussed on the exotic animals (and based on a very similar tragic true-life event that I remember reading about and watching in 2011), could have been the whole book. And the entire story takes place over a very short time, around a month, but so much happens, it feels that there was almost too much condensed into too short a time frame. I would’ve liked more exploration of Wayne’s backstory (some is provided in a coda at the end; this was fascinating and I felt could have been expanded and perhaps replaced Will’s time in New York).

But despite these comments on structure, the book is a marvel – certainly on a sentence level it is sublime writing and some of the best I’ve read this year. The connection with exotic animals is intense, moving, thought-provoking and poignant – what a waste, when we are losing so many of these magnificent animals everyday anyway in the wild. The world of Joe Exotic and his crazy story of course resonated, and the entire premise of the freedom in the US to keep these animals, added to the propensity for gun ownership, amounts to a very scary scenario.