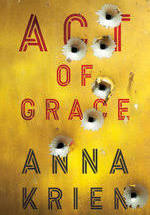 Act of Grace (Black Inc Books 2019) demonstrates author Anna Krien’s ability to flex her fiction muscle after years of training in non-fiction and journalism. The result is a literary fiction novel that feels authentically grounded in fact, with characters so real that they could be your neighbours or those you read about in the media.

An Act of Grace is a compensatory payment paid by allied forces to victims of collateral damage during wartime. In this novel, an Act of Grace payment is made to an Iraqi woman after a tragic incident leaves her bereft. But while this token gesture may make the top brass feel better about the accident, it leaves Toohey, the soldier involved in the event, feeling angry and betrayed. What does the payment say about his actions? He returns from the war psychologically broken with PTSD and physically damaged, suffering from a cloud of minute pieces of shrapnel that take years to work their way out of his skin. His wife and especially his son, Gerry, bear the brunt of his abuse, and the relationship between the two men is a study in familial dynamics and family violence.

There are two other main narratives followed in the book and while each at first appears completely separate, as the book draws to its conclusion, the different threads begin to knit together. Years earlier, a young Iraqi girl, Nasim, is a promising pianist and a lover of horses, with a famous poet for a mother and a gentle and supportive father. But when her family is first embraced by Saddam Hussein, and then falls out of favour both with him and his psychopathic son, they are faced with terrible choices and a search for escape. The third main character is Australian woman Robbie, dealing with her father’s dementia, the demons from her past, and revelations about her family history.

This is a book about the legacy of intergenerational trauma, the perils of forced migration and racism, and the tragic and lingering after-effects of war and conflict. It explores nationalism, sacrifice, loyalty, emotional debt, refugees and asylum seekers, Australia’s own dark colonial history and what people will do in order to survive. It is also an examination of men and violence – sown throughout the book like breadcrumbs are various instances of angry men, violent men, men feeling impugned and disrespected, men who enjoy control, men who demand acquiescence, men who are emotionally or physically absent or damaged.

Krien is a very talented writer and Act of Grace is beautifully crafted. She somehow manages to provide a broad, sweeping overview of world events and historically significant incidents, but also depicts small, intimate moments of human nature and relationships, everything underlaid with political and cultural significance. This is intelligent and clever writing; it is thought-provoking; and it asks the reader to keep up with the fast-moving plots lines and connect the dots between the three narrative trails. From large-scale acts of war and terrorism to one person’s traumatic memories; from mass protests and activism to one character’s small acts of revenge; from shattering flashes of life-changing incidents to the daily paper cuts of living with abuse – Krien manages to combine them all into a tale that is compelling, moving and tender, full of viciousness and violence, forgiveness and forgetting, loss and grief, escape and freedom.  If you appreciated Simon Cleary’s The War Artist, this book will resonate.