All Our Shimmering Skies – Trent Dalton 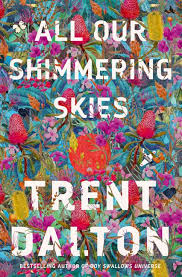 Those of you who are parents of more than one will know that feeling when your second child is about to arrive and you cannot imagine you will love them any more than you love your first. For Trent Dalton fans, it will be difficult to envisage feeling as much for anyone other than Eli Bell from his debut novel Boy Swallows Universe, but be prepared to watch your love expand, because Molly Hook has arrived. Dalton’s new book All Our Shimmering Skies (4th Estate Harper Collins 2020) gifts us another child protagonist that will capture your heart and open your eyes to wonder.

This book is a fable and a fairytale, a wild flight of fancy and imagination, a hero’s quest, a journey for hidden treasure, a story of curses and promises and gifts and loss. While Boy Swallows Universe was sometimes weighed down by the (admittedly, fairly fluid) parameters of autobiography, mostly a sense that the author was guided or hampered by his responsibility to the real characters in the book, this is not the case in All Our Shimmering Skies. Dalton’s full capacity for fictional imagination takes off with no boundaries and no constraints. With a wicked father and an evil uncle, a mysterious figure cloaked in mystery, young romance, grief and lost love, generations of hatred and revenge, thwarted desire and unrequited ambitions, a quest for treasure, fantastical obstacles thrown up at every turn, and in the midst of it all, a quirky group of travelling companions, Dalton has created a wild and evocative tale of hope, heart, wonder and love conquering hate and fear.

Set in Darwin during the Second World War, the chief protagonist is Molly Hook, only seven when we first meet her, but aged 12 for most of the story. Molly is the gravedigger’s daughter, which doesn’t even achieve capitalisation but is the only way she has ever been known. Her playground is the sad and empty space of Hollow Wood Cemetery, not that she ever has time to play as she is too busy with the adult work of actually digging the graves. The epitaphs on the headstones serve as reminders of those gone, the pain of those grieving, the shortness of life and the inevitability of death.

Molly loses her mother early and is left in the clutches of her disconnected father and her abusive uncle. She knows her family is cursed and that she has a heart of stone. She talks to the sky and it talks back, although the night sky tells her different to the day sky. She strikes up a friendship with Greta, one-time lover of her Uncle Aubrey, an actress searching for her time in the limelight, a hard woman with a steely resolve and a soft spot for Molly. The two team up with Yukio, a Japanese fighter pilot fallen from the sky, as they embark on a journey to follow a poetic map etched on a gold-panning dish to find Longcoat Bob, the deep-country sorcerer that she believes has cursed her family from generations before. The dark shadows chase them close behind all the way, but above them – always – are the shimmering skies.

The word shimmering appears again and again in the book – it describes bodies of water, sparkling mica underfoot, and of course the endless blue shimmering skies that look down from above on all the troubles and misfortunes and occasional good luck that befalls the hapless humans below. Like a myth or a legend, the shimmering skies, and the sky gifts that fall from them, represent eternal optimism, the search for gold of true worth, hope where it doesn’t seem possible hope can be found, and the comfort and joy of friendship and love.

Parts of this story are grim, visceral, heartbreaking and brutal. There are scenes no 12-year-old girl should ever have to see, let alone experience. There are trials and tribulations that seem impossible to impose on her. And yet Molly Hook survives, by putting one foot in front of the other and never losing sight of her goal or her dreams or her moral compass. For enduring these cruel passages, the reader is rewarded by a thread of hopeful redemption that twists through the story like a song line.

Indigenous culture is referenced respectfully throughout the novel and in fact lies at the very heart of the story. Dalton has clearly done his research. The Top End of Australia is exposed and celebrated in all its glorious colour and unique environmental features. The landscape is examined in detail; flora and fauna are depicted in a bright cacophony of awe and wonder. For anyone who has lived in the Northern Territory or visited Darwin, these descriptions will feel completely authentic, and for those who haven’t, this book will make you want to go there and experience the raw, natural environment for yourself. Harsh, unpredictable, dangerous, awe-inspiring, beautiful, peaceful – this could be an ad for the next NT tourism campaign.

And the 70 000 years of unbroken Indigenous culture are heralded as something to be cherished and nourished and nurtured. Dalton does a great job of seamlessly moving from the original inhabitants of the land to the Aboriginals of today, and of highlighting their continued connection to the land, their deep understanding of country, their respect for and unbreakable ties with the animals and birds and plants of this continent, and the abiding knowledge and understanding that Aboriginal people hold for their land. In the hands of a less able author, this delicate inclusion of so much Indigenous heritage and culture might have been a dangerous balance, but Dalton is so completely respectful and humbled by Aboriginal culture, and this shines through every aspect of the story. This may be a fable, and he does make use of magical realism to elaborate the story, but his inclusion of Aboriginal history is moving and very well crafted.

As someone who lived for five years in Japan, I also found the creation of the Japanese character Yukio to be respectfully authentic, with the included Japanese myths and stories ringing true.

Molly Hook is an unforgettable character with pluck and verve. She reminded me a little of Sheryl Gwyther’s Addie in Sweet Adversity (a middle grade book) – same ferocity and tenderness, same love of Shakespeare, same timeframe, same difficult circumstances to overcome.

Molly and her best friend Bert (a gravedigging shovel), her hope in the gifts that fall from the sky, her endless optimism despite the dire circumstances of her life, her persistence, her courage, her unrelenting belief in the goodness to be found in the hardest of hearts, her open generosity of spirit and her determination to uncover the truth, will fracture you and then piece you together all over again.

All Our Shimmering Skies is a story to plunge into headfirst, suspending your disbelief and immersing yourself in the lovely lilt of the language, the beauty of the landscape, the pain and hope and love of the human heart. The ending or resolution is achieved in a much more sophisticated way than in Boy Swallows Universe, testament to Dalton’s increased confidence as a writer and as mentioned earlier, by the fact that he has allowed himself untrammelled access to his imagination. This new book is a classic story that will stay with readers and inspire awe and wonder.