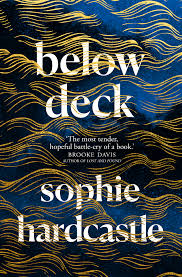 Author Sophie Hardcastle’s latest novel Below Deck (Allen and Unwin 2020) is a beautifully written meditation on feelings of trauma and love, narrated through a story of the meaning and shape of colours.

The book is divided into four distinct sections, each representing a time in the protagonist Olivia’s life (her early, mid and late twenties) but although the plot proceeds in a fairly linear way, the language is absolutely literary, rhythmic, wondrous and compelling. At many points I wanted to hear the author herself read her words out loud; they are so powerful and haunting, so evocative and consuming. Every paragraph contains melancholy or hopeful or thought-provoking imagery that is completely engaging – tender, moving, frightening. This is an author unafraid to leave an absence for the unsaid; unafraid of silence. She never tells us too much but leaves space in our imagination for us to connect the dots and complete the story ourselves.

The first section is titled Sea Garden, with each chapter given the name of a flower eg Sea Orchid, Sea Frangipani, Sea Daisy, Sea Lily. We are introduced to 21-year-old Olivia (Oli) who has synaesthesia and hears the world in colour. But her own personal space is mostly grey – she is estranged from her parents and living with her grandfather, who is sad and lonely since the death of his wife.

She wakes up one day, tired and dishevelled, on a boat, going she knows not where. The old man at the helm could be friend or foe. But ultimately the circumstance leads to a lasting friendship with a much older couple, who introduce her to life on the sea and open her eyes to the beauty and wonder of the world. Maggie and Mac quite simply change her life. This comes at a time when she is struggling with the power imbalance in her relationship with her boyfriend and navigating her own sense of identity, of boundaries, of the dynamics of a healthy relationship. The undercurrent of jealousy and control simmers beneath her insecurities and her inability to assert herself. But then Maggie and Mac ‘wrap themselves around me, like rings of a tree, layer upon layer. So that I no longer feel exposed. I feel whole, and because their love doesn’t make me weak, I feel unbreakable.’

This marks the passage to the second part of the book, titled Sea Monsters, with chapters named after fish anatomy – Fish Blood, Fish Bone, Fish Guts, Fish Scales. We have skipped ahead four years, and Oli is now crewing on boats for a living. But when she takes a job aboard the Poseidon, as the only woman amongst five blokes, the narrative immediately changes key into a sinister and precarious scenario. Oli realises that she is stuck on the boat in the middle of the ocean and that ‘at sea [and particularly below deck] no one can hear you scream’. At the beginning of this section, we meet a much more confident and worldly Olivia than from four years previously, but by the end, she has started to come undone. The humiliation of being a powerless woman, bound by her body’s functioning, is all tied up with the issue of consent in a section that is a strong representation of what the #MeToo movement is all about. Readers may find this triggering or confronting. It is vivid, authentic, visceral and unforgettable.

In part three, Desert, every title is given the name of a coloured sand – Pale Blue Sand, Pink Sand, Gold Sand, White Sand. Depicting her later twenties, this section again skips ahead. Rather than beginning where we left off, the story starts again, and we are asked to guess or imagine much of what has gone on in the intervening period. Oli is now curating an art gallery; she has close friends and close relationships with people important to her. But underneath her apparently successful life is the ever-present trauma of her past. And when the two spill together, she is unable to reconcile the compartments of her life that she has kept separated and distinct, leaving herself open to wounding and hurt. She makes a decision that once again, changes her life, although it is not immediately apparent if it will be for better or for worse. And another tragedy forces her to reconsider her life plan.

The final section, Sea Ice, set in the coldest and most remote part of the world, includes chapters such as Cloud, Glacier and Snow. The time frame is closer to the prior section than previously, and details a life-changing decision that Oli makes, one that challenges her idea of her relationships with others, confronts her sense of herself, makes her question her own motivations and past actions, and forces her to examine her fears and the protective carapace she has built around herself. This is totally an ‘I am woman; hear me roar’ moment which brings together the entirety of the novel.

Below Deck asks some profound questions about the choices we make in life, the humiliations we are forced to endure, and how we are able – or not – to cope with those traumas. It celebrates the indomitability of the human spirit, particularly women, who are often burdened by unique difficulties, but who – it might be said – emerge stronger because of this, like a red-hot iron forged in the fire. Repeatedly throughout the book, Olivia asks ‘We choose to breathe, don’t we?’ and sometimes this is a question, sometimes a rhetorical question, sometimes an answer, sometimes a riddle and sometimes a lament. And all the way through, the vivid way of hearing and tasting and smelling colours provides an incomparable and pivotal lens through which Oli sees the world, and by which we understand her perspective. This is a courageous and brave book which seeks to amplify women’s voices through the trauma they face and the numerous ways they survive and thrive.