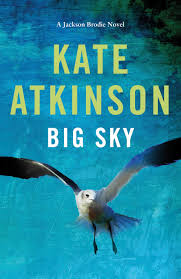 Kate Atkinson is one of my favourite authors – I’ve loved everything from her debut novel Behind the Scenes at the Museum to her more recent epics such as Life After Life and A God in Ruins. But she also writes the Jackson Brodie crime series, beginning with Case Histories, and followed by One Good Turn, When Will There Be Good News?, and the charmingly entitled Started Early, Took My Dog. Her latest Jackson Brodie novel, Big Sky (Penguin Random House 2019), is another cleverly-plotted and complex narrative, written from multiple points of view, which continues the saga of Brodie’s personal as well as his professional life, and is punctuated frequently with Atkinson’s ubiquitous sense of humour.

You could read this as a stand-alone, but I would highly recommend starting with Case Histories and reading the whole series in order. Jackson Brodie’s life is complicated, and I think it would be more satisfying to watch it unfold in sequence. That said, Atkinson is a wonderful storyteller, and Big Sky is a complete tale in itself (albeit with many hints and references to Brodie’s history). The book opens with a short chapter – barely a page – describing two people (one of them Brodie, one of them a bride, but not his bride) leaving the scene of an impending wedding before the nuptials can begin. A narrow escape. The book proper then begins, dated ‘One Week Earlier’. The story carries us along on the happenings of that week, which eventually – by the end of the book – meet up with the opening scene of the almost-wedding. And what a week it is. To say too much would be to spoil the plot, but Jackson Brodie, a private investigator (and former policeman) used to days on end of following cheating partners and photographing infidelities, finds himself tied up in a very nasty, sinister and far-reaching ring of trouble, and he finds he has much bigger fish to fry than a sly spouse.

Atkinson’s characterisations, her development of plot and her control of pacing and tension are all so well executed. And the distinctive voice – not only of Jackson Brodie, but of other less significant characters – is so wonderfully warm and endearing, so eccentric and quirky, so very funny and readable. Big Sky is highly entertaining.