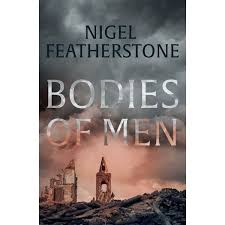 In Bodies of Men (Hachette Australia Books 2019), author Nigel Featherstone has depicted a tender and moving love story set amidst the backdrop of war. In Egypt in 1941, Australian corporal William Marsh, aged only 21, is saved from enemy fire by a fellow soldier and childhood friend, James Kelly. Despite a strong attraction as young boys, their families and society has pulled them apart, and the fact that they are both involved in the incident in Alexandria is a coincidence. In the midst of the confusion, James disappears.

William is sent to supervise an army stores depot in the Western Desert but is also given another – private – role: to find a soldier who has gone AWOL. That soldier is James Kelly. The two men’s stories are told separately – William’s work with his battalion, and James’ mysterious period of hiding in the home of a local family, itself riddled with secrets. But gradually, as William’s search for the missing soldier leads him to where – and why – James is hiding, the relationship between the two men reignites and becomes a force too strong to deny.
This is a beautifully described story of friendship and romantic love that was not easy in a time of strict moral codes and laws, with harsh punishments for anyone who crossed the line. William and James must hide their relationship from everyone: their families, their friends, and most of all their colleagues and the military machine for which they work. The story captures a time of distrust and disloyalty, a time when prejudices and shame were rife, when people were expected to behave in a certain way, and if they didn’t, the consequences could be dire. The complicated circumstances and conflicted loyalties of those affected by war – or involved in the resistance – are also examined. The blurb states: ‘There is nothing more important than love and refuge,’ a statement by one of the characters in the novel, but also a wonderful summary of all this story encompasses – love in all its forms (desire, pleasure, care, respect, companionship, commitment) and refuge of all shades, from the simplest show of honour or friendship to the life-changing risks of offering, or accepting, refuge and safe harbour. This book actually grew on me the more I read it, and while I found the beginning a little hard going, by about halfway I was thoroughly invested in the main characters, and by the end – a nail-biting and tense conclusion – I cared very deeply about what happened to them. This is a story of vulnerability and sacrifice, of persistence, of life-long yearning. It is a story about what it means to be a man in the world, and the many ways of becoming whole.