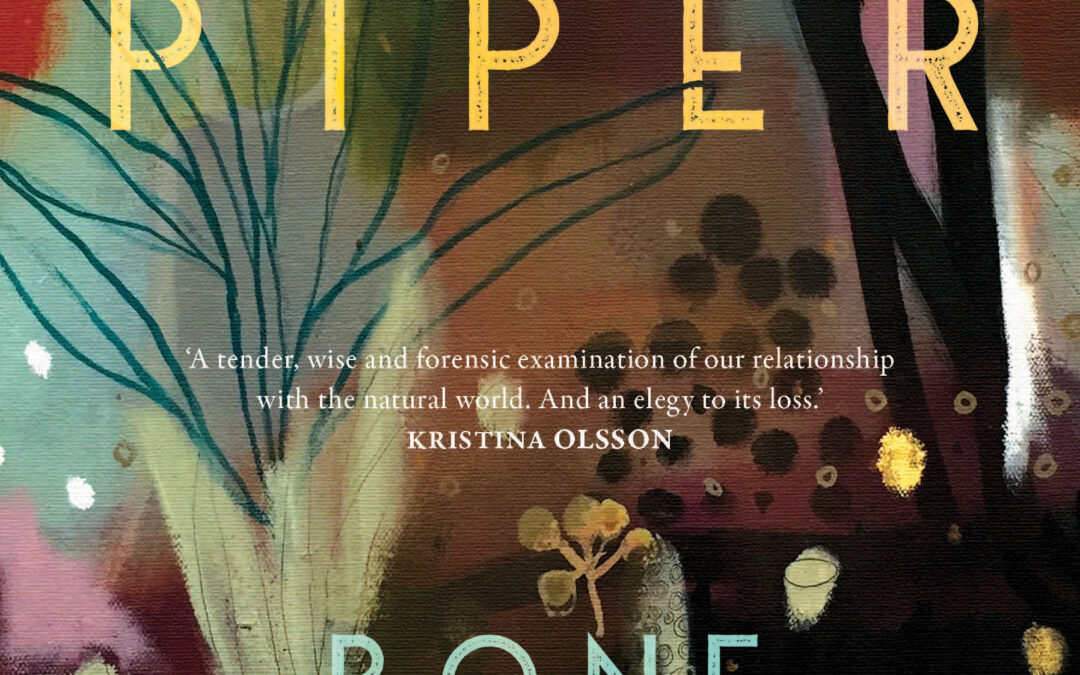 Author Sally Piper’s third novel Bone Memories (UQP 2022) feels like a building crescendo of her work to date, a powerful message about the natural world, and a quiet meditation on our place in it. Piper writes with calm authority about the interconnectedness of humans and the earth, and the synergy of the natural world. Loss is palpable in this novel, as is a recognition and appreciation of trees, plants and soil. This is a terribly and truly sad novel. It is also agonisingly hopeful.

Bone Memories is a thoughtful and considered attempt to make sense of a modern world dominated by people and their endless need for consumption and ownership. Piper compares this with the tens of thousands of years of indigenous connection with land that has gone before; years of people stepping lightly on the land and communing with it in a way that seems so at odds with the current focus on domination, cultivation, development and colonisation. Of staking a claim and then changing the land to fit our own purposes, instead of the ancient First Nations’ vocation of listening to the earth and her geographical features and allowing them to guide the way we interact with the natural topographies around us. The earth, soil, land – the country beneath our feet, teeming with microorganisms and bugs and the tree roots that silently communicate through underground passageways – all of it filled with the bones of those gone before, animal, human or plant. Layer upon layer of accumulated bone memories, tangible evidence that everything now gone once existed, and that all now living will soon enough be gone.

This is a quiet and respectful book, a work that invites the reader to ponder the big questions about life and loss, death and regeneration, place and ownership and release. Beautifully written, with so many well-crafted sentences, Bone Memories is a thought-provoking book about the legacy of trauma and the stain of loss on the land. It also touches on victim-blaming and the rights (or otherwise) of the living to claim the land to memorialise the dead. With three distinct voices and perspectives from three different characters, the book provides no answers, although there is no doubt where the author’s sympathies lie.

Billie is almost rooted in the earth, so strong is her connection to the place she lives, made stronger by the murder of her daughter Jess 16 years earlier in a beautiful spot of bushland only walking distance from their back gate. The giant fig tree that bore witness to this terrible crime, and that sheltered the dead woman and her traumatised three-year-old son, Daniel, until help arrived, is a site of almost religious significance to Billie. With a simple plaque screwed onto the tree’s massive trunk, this site has become representative to Billie of her daughter and all that she lost, all that was taken from Billie and Daniel that terrible day. Billie has become indistinguishable from the tree and all it means for her. It is where her daughter drew her last breath. It is sacred, sacrosanct, holy.

Daniel remembers little of that day. Now 19, he occasionally has migraines that flash shattered pictures of what might be memories – of his mother’s attacker, of the face that eludes him. No matter how much his grandmother, Billie, implores him to remember, so that some justice might be found, Daniel is unable to piece together the elusive fragments. Now a young adult, with his own life about to unfold before him, he begins to question his grandmother’s resolute and unbreakable connection with the past, and with the places – the tree especially – that memorialise Jess. Daniel carries his mother in his heart and struggles with an inability to move forward while so much of his history is anchored to what went before.

The third perspective is provided by Carla, now married to Angus (Jess’ husband and Daniel’s father). What a family to land in. How to navigate the complicated circles of grief suffered simultaneously but differently by Billie, by Angus, by Daniel. Carla and Angus now have a child together, Scout. How to introduce her to the malignant force that binds them together? After eight years together with Angus, Carla is ready to move on, to forge a new life for her and Angus, for Daniel and Scout, and yes, even for Billie; to put the past to rest and look to the future. But this puts her in direct confrontation with Billie, who is determined that her daughter Jess and the place she lost her life will not be forgotten. The fig tree and the ground upon which it is deeply rooted carry the stain of Jess’ life and loss and memory. How could Carla even consider breaking that bond?

Tied in with this story is another loss – that of a small Italian child, Marco, who has gone missing while on holiday with his family in Australia. This inexpressible grief – the loss of a child – is married together with Billie’s hurt of years earlier. In moments, Billie sees Marco in visions, images that seem real and true. I would have loved to have seen more of these ethereal moments, which are beautifully captured and rendered with such sensitivity. It is a different child, a different time, a different story, but somehow the two thread together seamlessly to emphasise the sharp bite of brutality, the keen cut of abrupt loss, the long tail of trauma.

This is a heavy book – how could it not be, with such issues at its heart? But the weightiness of the content is not dense or impenetrable; rather it is thought-provoking and inquiring. And the darkness is tempered by light – the impossible beauty of the natural world, and Piper’s ruminations on the wonder and magic of nature. The novel’s depth is also lifted by the luminous language, the complex and detailed descriptions, the vivid and joyful celebration of our connection to the land, if only we would take the time to stop and notice. To commune. To pay homage. To relish and appreciate the beauty all around us.

One of the significant questions of this book surrounds who has the right to memorialise a particular place to commemorate the loss of one person, when that place, that ground, has likely seen losses of tens of thousands? Not only human losses – massacres, for example, or disasters – but the extinction of species, the destruction of bushland, the myriad ways in which the land is desecrated. The author admits herself vulnerable to the numerous white crosses or posies of plastic flowers or chained bicycles that denote the site of a tragic accident. Why should this very private pain then become public? Why should someone completely unconnected to the incident be reminded of pain and grief and loss when perhaps they seek only to commune with nature on a restful bushwalk, or drive to work unassailed with reminders of the dead? Piper wrestles with this thorny issue throughout the book, aware of her own biases and conflictions, open to opposing opinions, ever hungry to delve deeper into the ethical quandary. This dilemma remains unsolved, as do so many other unanswered questions. But that is the point of this book – the questions and the discussion, not an unequivocable answer. As with all good novels, Piper leaves that in the hands and minds of the reader, to interrogate their own thoughts about this matter, and to come to their own conclusions.

This story of a family living in the shadow of unimaginable pain and loss comes to a conclusion, or a resolution, as it inevitably must. The ending is fitting and satisfying.

Sally Piper is a wise and thoughtful writer who devotes herself entirely to the subject she is writing about. This book began as some thoughts about the holloways of England but became something much closer to home, almost as if the writer had to travel a far enough distance to enable her to look back at her own country through a different or more refined lens. In the end, she has created something that encompasses the entire world and our relationship with it. I absolutely loved the second line: ‘Time to clear the litter of the living from the path to the dead’, a reference to Billie’s unending devotion to sanctifying the ground that she believes still holds traces of her daughter. Bone Memories will make you question your relationship with the natural world, your responsibility to it, your care of it, and what it gives you in return. This book will leave you pondering long after the last page.