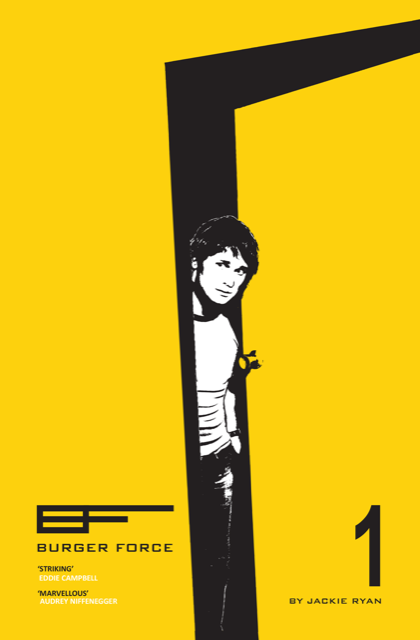 Before I read Burger Force, I assumed I was not cool enough to read it or understand it. After I’ve now read Burger Force (Parentheses Press [1] 2016; [2] 2017; [3] 2018]) I still think I’m not nearly cool enough to read it (and perhaps that’s the best review I could write!), but I do understand it better, and I have a much deeper appreciation and respect for the talent, skill, vision, creativity and production finesse of creator and author Jackie Ryan.

Burger Force is a comic, or a graphic novel, with a difference. Well, with quite a few differences. It is an experimental project that has been in the pipeline for about 10 years, with the first published hard copies (of Volume 1, 2 and 3) available in the last three years. The style is experimental in that the illustrations have been developed from actual scenes, posed with real actors (and various other good-looking people), that have then been converted to black and white images and retouched by hand to represent the comic style reminiscent of the 1960’s (think Get Smart but with a modern twist). It would be a waste of time for me to try to explain how the magic happens, but Jackie Ryan explains it all very well in the endnotes of the first volume and in an included essay that details her use of technology (ever-changing) with real people, added to a killer script, to produce this remarkable work of art. Best that you read it yourself to discover her process. I still don’t pretend to fully understand it, but wow, even with my limited technological knowledge and my non-existent comprehension of film-making, I can recognise that what she has created is unique and complex. She thinks outside the square. I previously knew Jackie as a masterful researcher, historian and writer of award-winning non-fiction. I had heard rumours about her other life as a creator of comic material – and I certainly knew she had a great sense of humour – but as I said, I really had no idea what that consisted of, and I certainly did not appreciate the intellectual smarts, the witty dialogue, the engaging storylines and the technical prowess that have contributed to the Burger Force phenomenon.

So what is Burger Force? Well, it’s a spy story about secret agents who operate from an underground facility beneath a fast food outlet. It’s pop culture on steroids. It’s ridiculously beautiful people – some famous, some not, but most with some degree of traditional acting / burlesque / circus / etc training featuring in each scene. In Volume 1, we meet Mercury, a young man who has been selected – through a series of strange and random coded signs and messages – to be involved in Burger Force (although he doesn’t yet understand what or who that is). With familiar scenes shot mostly around recognisable public Brisbane buildings, Mercury’s recruitment or indoctrination begins. In Volume 2 (spectacularly blurbed by no other than Barbara Feldon herself), Mercury is unsatisfied with his new role as it seems to have a definite lack of disguises, code words and high-tech gadgets, but he is called upon to help when it is discovered that somebody has been cloning Audrey Hepburns all over town. And in Volume 3, a mysterious dating scam is knocking off its clients. The other characters: Alex, Cilla, Cole, Oriana, Phoenix, Venus, Aspen, the Burger Twins, Professor Serafin, Mr Eisenstein and Mrs Eisenstein and Derwent, along with a handful of cameo appearances from other famous actors called upon for one-off roles, are all captured with a heady combination of dry and deadpan humour, intellectual savvy, sixties’ sense of place but modern scenarios, and diabolical masterminds determined to create chaos and destroy civilisation as we know it.

If you are into graphic novels or interested in the process of digital reimagining, Burger Force will satisfy you with some answers but probably pose even more questions; it will ignite your excitement about what is possible in art if you have the curiosity, the courage and the lack of funds required to be super resourceful. If you are into film and TV, you will no doubt recognise many of the actors portrayed in these comics. If you are a retro tragic, you will love the Get Smart / Avengers / The X-Files references (all of which Jackie refers to as inspiration for Burger Force). And if you have a taste for the wacky, weird and witty, you will appreciate the special kind of intellectual ferocity combined with a sense of fun that has gone into making this project. I appreciated getting out of my comfort zone and tackling an art form that is (for me, at least) unusual: just confronting and confusing enough to keep me thinking, and just smart enough and done with such professional skill and daring to make me realise there is a whole comic book world that I know very little about. I still think Burger Force is too cool for me. Perhaps it’s just too cool in general. And maybe that is still the best review I could write about it.