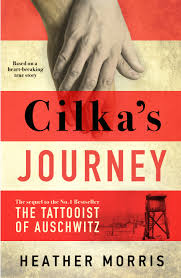 Cilka’s Journey (Echo Publishing 2019) is the companion novel to Heather Morris’ international bestseller The Tattooist of Auschwitz. Apparently based on the true story of Cilka Klein, a minor character in the first book, this second novel follows Cilka’s journey, beginning in 1942 when, at only 16 years of age, she is taken to Auschwitz-Birkenau Concentration Camp and immediately separated from the other prisoners and used by SS Officers in the time-weary way of war the world over: regular rape in return for survival and certain privileges. The book then follows her story as, after liberation from the camp, she is charged (by the Russians who rescue her) as a Nazi collaborator and sent away for a 15-year prison sentence to the isolated, desolate and brutal prison camp or gulag in Siberia known as Vorkuta.

The unfairness of this sentence, and the fact that it is a result of Cilka, merely a child, only doing what she had to do in Birkenau to survive, is compounded by the harsh circumstances of her incarceration at Vorkuta. While she befriends a female doctor and learns nursing skills, becoming indispensable to the sick and injured under terrible conditions, she lives in a horrific environment with women who know nothing of her past or why she has been sent to Vorkuta. And despite befriending many of these women, she is too humiliated to share her past with anyone. Exacerbating her situation is the conditions of life in the prison – male prisoners regularly rape and beat the women inmates, it is cold beyond imagining, there is never enough food or medicine, and 15 years seems like the rest of her life.

But despite these circumstances, Cilka manages to meet and tend a man called Alexandr; hope and love blossom and she feels that she may have some small chance at happiness, if only she can survive.

This book is all about survival. Cilka is a strong, capable and resilient woman, and others often refer to her as the bravest person they know. She frequently risks her life to help others or neglects her own needs to gain favours for others. She is a natural leader, and her quiet determination and resolution sees her taking a stand, being confident and outspoken, and constantly wrestling with her internal conscience about her past actions and her current behaviour. Read as a story about one young woman’s fierce determination to survive, against all the odds, this novel can be interpreted as a triumph of the human spirit over brutality and cruelty.

However, this novel – as with The Tattooist of Auschwitz – has caused some controversy. Most recently, George Kovach, the stepson of Cecilia Kovachova (the real person that the fictional character Cilka is based upon), has called the book ‘lurid, titillating, appalling and extremely hurtful’. In an interview published in The Guardian, Kovach claims that the Cilka depicted in the story is nothing like the woman he knew as his stepmother. The two issues he most disputes are firstly that Cilka Klein has a sexual relationship with the head of the camp, SS-Obersturmfuhrer Johann Schwarzhuber, in addition to being the sex slave of Anton Taube, another SS commander at Auschwitz, a circumstance described as ‘false … patently absurd … and [the possibility of such a situation] being non-existent.’ The second issue is that in the novel, Cilka steals drugs (for other prisoners) from the Vorkuta camp hospital (in a plot line related to protecting or hiding her reputation from her activities at Birkenau). This has also been branded as unlikely to have happened at all, given the few drugs to which the hospital would have had access, and especially unlikely in Cecilia Kovachova’s case, as she later worked as a senior government accountant and ‘had a reputation in Slovakia for incorruptibility … the idea that she would steal drugs from desperate patients would have devastated her’.

Subsequent to George Kovach’s criticisms, Morris allegedly removed his father’s name – Ivan Kovach – from the story (as Cilka’s love interest) and replaced it with another man, Alexandr. But Kovach refused to be associated with the project in any way (he had been asked to contribute an afterword) and instead is asking for Morris to apologise and to provide a percentage of the profits from the books to an appropriate charity related to the Russian gulags or the Holocaust.

But as with Morris’ first book, there are always two sides to the story. Morris insists she is a writer of fiction, not an historical researcher, and she does make it very clear at the start of both books that what follows is a reimagined fictional account (although based on a ‘true and heartbreaking story’). She writes that the book is ‘based on what I learnt from the first-hand testimony of Lale Sokolov …from the testimony of others who knew [Kovachova] and from my own research …’ and that ‘… although it weaves together facts and reportage with the experiences of women survivors of the Holocaust, and the experiences of women sent to the Soviet Gulag system at the end of the second world war, it is a novel and does not represent the entire facts of Cilka’s life’.

And so we return to the ethical and moral dilemma that I outlined in my review of The Tattooist of Auschwitz: How justified are the criticisms levelled at this book? How much does it matter that Morris is not Jewish? How much can a book set in a real (and terrible) place, gleaned from the second-hand oral history of a survivor about a third person, rely on fiction to reimagine the past? Where do the blurred lines between fact and imagination intersect? How to defend Morris’ right to tell what she freely admits is a fictional story? How to respect the critics who feel that she has taken liberties and profited from a story that doesn’t belong to her?

I suspect that Morris had less licence with this book than with her first. The Tattooist of Auschwitz was based on the life of Lale Solokov, from information gleaned directly from him during interviews. Cilka’s Journey is based on much less information, provided not by Cecelia Kovachova herself, but through Solokov and other secondary resources. Yes, it is an imagined story, as so many fictional stories are. It takes a few scant facts and extrapolates them into a complex story. There is perhaps no way for Morris to know, or to be expected to know, the actual details of Kovachova’s life.

I suppose my question would be: why not write a completely fictional character? Why base Cilka on the life of an actual person, with living descendants who have memories of her as a woman and a family member, if the attributes and circumstances that you (as an author) proscribe to that woman might be hurtful or untrue or distressing to those living relatives?

Cilka is a complex character, and while her strength and determination shine through, so too does the controversial blurring of boundaries around what she may have done willingly and what she may have done under duress, added to the fact that she was very young (only 16 at the beginning of the first novel) and was presumably operating with the undeveloped wisdom and lack of experience of a child. It is all a very thorny problem and has caused a lot of debate within the Jewish community. I have no answers to these questions. I am not Jewish and I have not experienced the intergenerational trauma associated with the people for whom the Holocaust and other atrocities are not merely a fascinating if horrifying part of world history, but instead are deeply-rooted traumas embedded in their psyches; evil that happened within living memory and which still holds a powerful grip on survivors and their families. This degradation of humanity should be personal for all of us, but for some it is more personal; it is part of their DNA, and it is sacrilege to represent it with anything less than complete and respectful honesty, due diligence, exacting research, compassion and empathy. As an outsider, or not someone who is part of that community, it behoves the author to really get it right. And while Morris may insist that this is a work of fiction, and only loosely based on fact, she must also then be prepared to answer to the criticisms of those who constitute that community, especially the family of those she writes about, and to openly share her intentions, her motivations and her objectives in writing the story as it is presented.

Is fiction ‘based on a true story’ ever truly fiction? How much can an author make up? How does the reader differentiate between the actual truth at the heart of the book, and the fictional imaginings of the author that expands those truths into a complicated story? And what if others debate the veracity of those truths? Whose story does it then become? If it was your grandmother or your aunt or your sister depicted in a fictional story in a way that you felt was untruthful or hurtful or misleading, how would that make you feel? Or is an author entitled -under the clearly expressed label of ‘fiction’ – to reimagine and flesh out the missing details in whatever way she sees fit? Again, I think it is up to the reader to decide.

(Postscript: After my interview with Heather Morris at Avid Reader last night, I received a very telling message this morning. To paraphrase, the sender asks: ‘I wonder who I would trust to tell my story, and if they wrote it, then whose story would it really be?’)