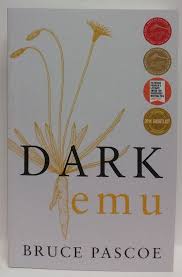 When I grew up at school in the 70’s and early 80’s, we were taught the history of Australia with gospel-like ardour. The intrepid explorers who discovered this great virgin land and their introduction of development and civilisation to the ‘simple’ (and this word was used in all its meanings) hunter-gatherer native people who inhabited the country but were easily swept aside in the name of the great white human endeavour. Now that I am an adult – and with the benefit of the writings and teachings of both indigenous elders and scholars and non-indigenous academics – I am aware of just how misguided and wrong that history was; thankfully, today’s young people hopefully receive a version of the past that is much more nuanced and accurate. But despite acknowledging my own ignorance in terms of education – despite knowing what I don’t know – Bruce Pascoe’s book Dark Emu (Magabala Books 2014) completely blew me away.

I know, I know – I’m late to the party. Friends (Sally Piper, Fiona Stager, Krissy Kneen, Anita Heiss and more) have been banging on about this non-fiction account of pre-invasion Aboriginal life for years, and I don’t know why I delayed in reading it; perhaps I anticipated it would be dense, heavy or impenetrable. I couldn’t have been more wrong. What I discovered has deepened my respect for Aboriginal culture and its achievements, shifted the kaleidoscope in terms of the prism through which I view our country’s history, and demonstrated just how much I don’t know about what I don’t know.
But first let me put any potential readers’ minds at rest: Pascoe does this in the most gentle, compassionate and humble way. He is not out to criticise or to defame. He reads our history with an open and understanding approach, firm in his conviction about Aboriginal culture but never doing so in a way that feels angry or resentful. His sense of humour shines through at every turn; he gives credit where credit is due; he interrogates his material with a forensic and academic thoroughness but still manages to make it comprehensible, interesting and easy to follow. And he presents his findings not as a way to rewrite the past (although that is certainly necessary) but more as an optimistic way to face the challenges of the coming years, such as climate change, by taking advantage of the thousands of years that this country flourished under Aboriginal custodianship, and utilising this to ensure Australia employs sustainable practices into the future.
Dark Emu explores Australia’s First Peoples and their husbandry (midwifery?) of the land in ways that modern Australians are only just now coming to accept and understand, and Pascoe examines issues that the Colonialists who invaded this country either failed to see or willfully chose to ignore (probably a bit of both). In chapters covering agriculture, aquaculture, housing, the storage and preservation of food and the use of fire, he patiently depicts the complex system of Aboriginal society and the cultural rules and laws that enabled Aboriginal people to carry on a mostly peaceful and effective communal way of living that showed respect for the land, cooperation with others, and sustainable practices that ensured the continuation of their existence for generations (and when I say generations, we now know that we’re talking about at least 65 000 years, maybe 80 000 years, and perhaps even longer than that.) Did you know, for example, that evidence now clearly points to Australian Aboriginals being the first ever people – in the world – to bake bread? They beat the Egyptians by at least 17 000 years!
Dark Emu is full of such examples. And these are not facts obtained only through the oral history of Aboriginal people. This is scientifically-recorded information based on the handwritten and illustrated records of early white colonialists, pastoralists and settlers, and by modern forensic investigations using state of the art technology and carbon-dating techniques. I know now that my primary school image of the Australian Aboriginal person squatting in a modest humpy propped up with a stick is very far from the truth: that Aboriginal people built complicated housing structures and congregated in villages and communities. They developed innovative fishing techniques. They harvested enormous amounts of grain and other foods, preserved them and stored them for use in celebrations in which thousands of people would attend (and be fed). Their knowledge of the seasons, the soil, the native wildlife and the use of fire was sophisticated and impressive. (Just because it’s not written down – in the traditionally-accepted Western version of knowledge accumulation – doesn’t mean it wasn’t widely known and accepted as common practice.)
Bruce Pascoe concludes Dark Emu with the statement: ‘To deny Aboriginal and Torres Strait Islander agricultural and spiritual achievement is the single greatest impediment to intercultural understanding and, perhaps, to Australian moral well-being and economic prosperity.’ He encourages curiosity about our history not only because up until now, most of us had it wrong, but because our country’s past could provide an essential guide to unique opportunities for survival and prosperity in the future. I cannot recommend this book highly enough. You will be astonished.