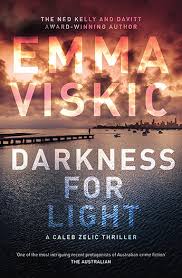 What a delight to return to the life of Caleb Zelic in Emma Viskic’s latest crime thriller Darkness for Light (Echo Publishing 2019), the third in the series following Resurrection Bay and And Fire Came Down. Caleb, a Private Investigator, is trying to live a quiet life after the traumatic events of the last two books. He’s trying to Make Good Decisions (his new mantra). He’s reconnected with the deaf community and has found his tribe and some good friends. He’s found a helpful therapist who knows what he has done, understands his past decisions, and is committed to Caleb’s ongoing mental health. He is in the midst of reconciling with his Koori wife, Kat, a process complicated by the trepidation of impending fatherhood, his wife’s concerned and protective family, and his own desire to stay out of trouble. But trouble has other ideas. It seems to follow him wherever he goes; in fact, the more he tries to stay away from it, the harder and faster it seems to track him down.

The first chapter opens with the cosy scene of a children’s farm and ends with a bloody murder. And from then on it only gets worse. Caleb is forced to hook up with his previous partner, Frankie, a woman who both saved him and double-crossed him. But this time it is Frankie who needs help – her nine-year-old niece has been kidnapped and Caleb is desperate to save the little girl he has only just met. Desperate to do something good. But of course the plot is thicker than it at first appears, and before long we are immersed in the world of sabotage, money laundering and blackmail, as well as kidnapping and murder. The body count rises. Caleb always seems to be at the wrong place at the wrong time. He must make decisions about who to trust and how much information to share. And he tries to do all this without unnecessarily worrying Kat.

Darkness for Light can be read as a standalone but if you haven’t read any in the Caleb Zelic series, I highly recommend you start at the beginning, because Viskic executes beautiful crafting of narrative and character arcs that connect each of the books. Each one adds more nuanced layers to what we know, and feel, about Caleb. As a deaf protagonist, and a deaf PI, he faces more barriers than most. Signing is fine, if the person you are communicating with can also sign. Otherwise he’s left with a mixture of lip-reading and guesswork. One of the best aspects of this series is the way in which Viskic reframes Caleb’s disability – his world is one where ‘hearies’ are the abnormal, not the other way around. He is constantly having to remind people that he can’t hear them if their head is turned, or if they mumble, or if they have facial hair. He’s always contending with idiots who think his deafness affects his vision, or his mental capacity. As a Private Investigator, he can’t hear people sneaking up on him, he can’t overhear muffled conversations, he can’t listen to phone calls; he can’t do a lot of things that would avoid him facing dangerous situations. But he more than makes up for this in a myriad of ways. He is smart and courageous and enterprising. He has many character flaws, especially personal ones, but where his work is concerned, he is diligent and determined, with a strong sense of right and wrong. He wants to do the right thing, even if he doesn’t always manage it.

The plot in this book is complex and intriguing, involving a large cast of characters, many of whom could be suspects or victims or witnesses, many of whom end up dead. Viskic leads the reader on a journey of discovery as we uncover – along with Caleb – the clues and the red herrings and try to distinguish between the two. Viskic’s unerring manner of finishing each chapter with a breathless cliff-hanger propels the reader relentlessly forward at a cracking pace. And her narrative style – short, sharp sentences, chillingly brief descriptions of violence, the vivid and raw physicality of the action – all combine to provide a highly addictive, tense and focussed story that is difficult to put down at any point, because you simply must know what happens next. There are a couple of completely unexpected twists that momentarily throw you off guard as you recalibrate your opinion of some of the characters and their motivations.

Caleb’s complicated relationship with Frankie is compelling. The development of Kat’s character is engaging. And the fact that the little girl, Tilda, at the centre of this story, is constantly at risk makes for gripping reading. Viskic once again manages to incorporate diversity so seamlessly into the narrative that it becomes the new normal. Difference is not merely highlighted or celebrated but woven into the fabric of the story so that it is a tightly bound and inextricable factor.

If you are a Viskic fan, this latest instalment is as good, or better, than the previous two. And if you are a Viskic virgin, and looking for a new crime series / author, get all three books and start from the beginning. You won’t be disappointed.