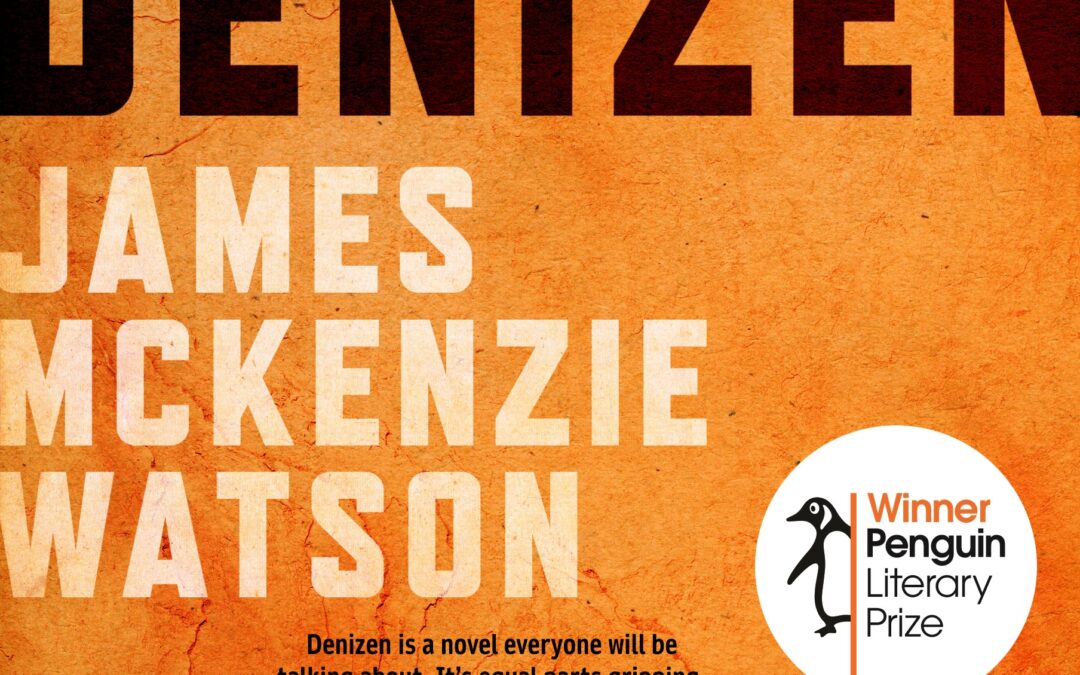 Last year’s winner of the Penguin Literary Prize, Denizen (Penguin Viking 2022) is a dark, moving, rural outback, psychological horror thriller that will surely be known as ‘peak bleak’ but in a completely compelling way. Author James McKenzie Watson has created a strange, fast-paced, tense and page-turning story that I read in an almost frenzied state over two days – thank goodness it’s separated into Parts One, Two and Three, because they were they only breaks when I felt able to put the book down, take a breath and continue with life.

Denizen is expertly constructed and crafted with an authorial authority unusual for a debut writer. In a brilliantly finished tapestry, McKenzie Watson has managed to weave together an engrossing and engaging novel that does not let up for a moment from beginning to end. I am blown away by his audacity in writing such a novel; it courageously peers into the darkest shadows of our minds and pokes a stick at every tender, intrusive or unsettling thought or action that has ever hung a mantle of shame and guilt around our necks.

The story is told in two alternating timeframes – that of nine-year-old Parker, a country kid living in an isolated community who is desperately anxious that there is something fundamentally wrong with his mind. His own mother’s connection and relationship to him, and the manifestation of a terrible act of violence, seem to prove him right. We also see Parker as a young adult, a happy and settled partner with a new baby, who returns to his hometown as part of an intervention to save an old friend from her bad choices. They camp at the creek, a scene of critical importance to both his past and his future.

This book was absolutely not what I was expecting. I’m not sure what I expected, but this was not it. There are surprises and U-turns and twists that came from nowhere and added a whole new layer of complexity to the story. Just when you think you have a handle on a character, they shape-shift to something new. Crime, gothic horror, suspense, psychological drama … Denizen is like the love-child between Gabriel Tallent’s novel My Absolute Darling and the horror film Hereditary. The imperceptible unravelling is masterful, executed with such skill that you don’t even realise it’s happening.

Although the story is violent from the beginning (and there is a trigger warning for abuse and mental illness), it nevertheless starts from a place we can comprehend. It makes sense; it is logical. But then there is one paragraph that subtly shifts the lens through which we see this story, and it abruptly becomes a creeping sense of dread, a nightmare from which we cannot awaken.

There are so many things I love about this book. One is the interiority of the writing. Rarely does one read a book that sets you so squarely and intimately into the mind of the main protagonist, while still retaining the ability for the character to surprise himself, and therefore to surprise the reader. I absolutely cared about all of the characters in this book, even those I at first felt no affinity for, and I was totally uncertain as to what would happen to each of them.

Another is the setting, which is quintessentially rural outback Australia. The author knows this country like the back of his hand. Every leaf on every tree, every blade of grass, every rotted fallen log and upturned boulder and shadowy grotto is depicted with the utmost realism.

I’ve already mentioned the plot – so unpredictable that I did not know where it was headed, and in fact it became increasingly and disturbingly discombobulating; and the characterisation – Parker especially is so utterly real and relatable, so vulnerable, so confused, so much at the mercy of his own complex inner life.

McKenzie Watson spoke to me about the comfort of stories that are honest, truthful and authentic – despite their bleakness; he finds it reassuring that publishers and/or readers are championing these works. And I couldn’t agree more, because no matter how bleak or dark the story, somebody, somewhere, has encountered that situation in real life, and so why shouldn’t we read about the darkness that people often suffer in silence, thinking it is only them? Why not expose the often frightening and humiliating truths that are never spoken of? Surely that is a way that fiction can begin a conversation, make someone feel less alone in their feelings, encourage a dialogue about the dark and the bleak rather than the neverending (often fake) euphoria and optimism we face on social media? This book speaks to those who have visited those shadowy places, and gives others the opportunity to glimpse what life is like for people quite different to themselves.

Point of fact: I was warned that this book was ‘bleak’, but honestly it is absolutely no different to the circumstances and situations I see through my work in my other life that is not writing. Every single act in this book is not only plausible, but I have also witnessed it or heard of it happening. For some readers, Denizen will be shocking and unbelievable, but for others – a lot of others – it will be familiar, recognisable and intimate. The vulnerable and the damaged in our society deserve to see themselves in fiction; they deserve the opportunity to know that someone understands their pain, and can see the reasons and motivations behind their behaviour.

I am not going to say anything about the ending of this book other than that it was simultaneously shocking and unexpected, while also being inevitable. The internal breakdown of character is distressing and yet by the last page, you feel as if you have uncovered a secret, discovered a veiled truth that has been hiding in plain sight.

Read this book. It will break you. But it will also give you a greater understanding into mental illness, fear, shame, guilt, violence, the boundaries of friendships and the consequences of our actions.