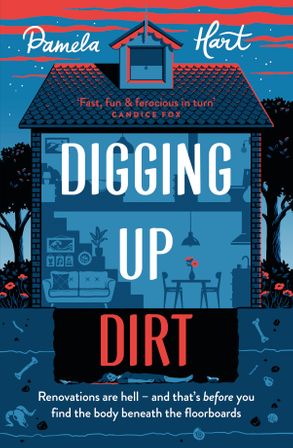 Pamela Hart is a best-seller chameleon writer, able to produce work that satisfies a particular demographic or genre of reader, across several categories. She writes a mystery series and also historical fiction. Under the name Pamela Freeman, she is a well-known children’s author and fantasy writer. It seems that whatever she turns her hand to, readers really engage with her stories. Her latest book Digging Up Dirt (Harlequin HarperCollins 2021) is an easy to read, light-hearted, cosy murder mystery that would be right at home in the town of Midsomer (if it was transplanted to Sydney).

Poppy McGowan is a TV researcher for an ABC children’s show. She is in the middle of renovating her modest home (which is already traumatic enough, what with tradies and delays and increasing costs…) when a builder discovers bones under the floorboards. Poppy’s home is heritage-listed, and if the bones are human, of course the police must get involved, but even if they are animal (it is suspected the bones might belong to the fat-tailed sheep of the early 1800’s), then that means all work will have to halt and her home will become an important archaeological dig site. Unfortunately for Poppy, the person sent to investigate the find is her nemesis, archaeologist Dr Julianne Weaver, who is set for pre-selection for the conservative Australian Family Party (and its affiliated evangelical church, Radiant Joy … hmm … sound familiar?!) But early in the story, the good Dr Weaver is found murdered in Poppy’s half-renovated house, and this creates a whole new set of problems. Is the Museum of New South Wales involved? Is the attractive Tol a suspect? (He’s Julianne’s archaeologist boyfriend and secretly admired by Poppy). What about Poppy’s boyfriend, Stuart? He’s a bit of an odd fish. And then there’s a whole host of wacky characters who belong to the fringe political party and/or to the happy/clappy church. Julianne had a host of rivals, ex-lovers and people she just didn’t get along with … any one of them could have had the motive, means and opportunity to get rid of her. Her death is expedient to many.

But perhaps most of all to Poppy herself, who quickly becomes the main suspect.

Poppy is very media savvy and has a network of contacts; she is determined to clear her name and unearth the truth. Meanwhile, as she’s concentrating on that, the heritage dig at her house continues, delaying her new flooring and kitchen and every other tradesman she has booked in. Poppy’s relationships and her work are sorely tested as the days march darkly on.

Digging Up Dirt is fast-paced and funny, quirky and clever, dark and full of dirty secrets. Hart explores serious contemporary issues through the lens of an accessible story that is likely to appeal to many readers. With humour and the distinctive voice of Poppy McGowan, this fun story is like a rom-com film, peppered with wit and the complications of romance. For readers who enjoy the characters and antics of authors such as Katherine Collette, Cassie Hamer and Graeme Simsion.