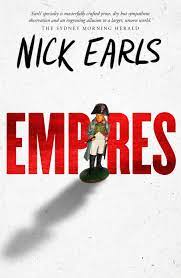 Author Nick Earls’ Wisdom Tree series of novellas was a triumph, and he has built on those skills to write Empires (Vintage Penguin Random House 2021), a novel comprised of five sections that could each easily stand alone but together are more than the sum of their parts. A book about boys and men, ‘spanning centuries and crossing continents’, it explores, as its title suggests, the empires we build in families, in society, in countries, and the ‘interconnectedness of all things’.

The first two sections are wonderful. The novel opens in 2018, narrated by Mike, an Australian living in Alaska with his partner and her young son. Formerly a ski instructor (but that career ended with a shattered knee as a result of a car accident), Mike has begun selling real estate, and the opening scene with his client Ellen and her shed full of historical collectibles is simple and yet one of the best in the book. The rich characterisation of Mike, his partner Lacy, her son Cedar and even minor characters such as Ellen demonstrate Earl’s exceptional writing talent. On its own, this could be a beautiful and complete novella. The second part is set in London in 1978 and is narrated by Mike’s older brother Simon. This is perhaps my favourite section of the book. Simon, Mike (then Michael) and their parents live next door to an ‘eccentric impresario’, George, who owns a string of theatres, encourages young Australian Simon to teach him to swim in his private pool, and amazes the adolescent with his cabinet of curiosities. And it is in this chapter that the through line or thread that connects these different sections is revealed. Of course, the families / ancestors are there, but there are objects too that last through the centuries and pass from hand to hand over time.

The third section is set in Washington DC in 1928 and is written in the form of an interview with a retired US senator about the time he spent in Russia in 1916, and his role in attempting to save a young heir to an empire. While this part is quite dense with historical fact, the story is narrated in an engaging way, and tells the story of a sliding door moment of a well-known part of history. The next section, in the form of a diary, is written by an Irish teenager on the run from the law in Vienna in 1809. As Napoleon besieges the city, the young man seeks refuge with some famous composers. The final section is set in Hong Kong in 2019, and sees brothers Simon and Mike reunite after some 30 years apart or estranged. Their lives have been very different, and not a few secrets – many about the past – are disclosed. There is one significant secret revealed that brings the brothers both closer together and further apart. Again, the objects that have threaded throughout the entire novel appear in this final section, closing the circle nicely on historical mementos and family history.

The novel explores the themes of the passage of time, the past reaching forward into the future, and the relative impermanence and transience of human lives when compared with historical objects or indeed the story of history itself. The themes of families, connection, grief and loss, ambition and fervour are also examined. As the title suggests, empires are at the heart of this book – the smaller empires of families, the larger empires of countries and the all-encompassing empires of eras and epochs. By writing these five small samples of completely different lives and times, Earls has managed to create a much bigger picture of the interconnectedness of all things in the world. The reader is left with the impression that although there is nothing ever truly new in this life, it is nevertheless endlessly full of surprising coincidences.

The cover features an image of Napoleon casting a long, phallic shadow … which I couldn’t help but associate with his reputation as a small man wanting to be much bigger. Empires is a book about small things and small people, as well as about large issues and famous and infamous people, but in the end, it is the emotional truths that do not change with time that create the foundation for this story.