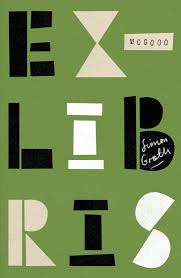 This is one of the strangest book reviews I’ve ever written, because you will never read the book I’m about to describe to you. Don’t get me wrong – you can certainly BUY the wonder that is Ex Libris (Ghost Owl Press 2020) by trailblazer and digital publisher extraordinaire Simon Groth. But the book that you purchase will be quite different from the one that I have purchased and reviewed here for you. Let me explain why.

Simon Groth began the Ex Libris project a few years ago. (Ex Libris, by the way, means ‘an inscription on a bookplate to show the name of the book’s owner’, a definition for which the meaning will soon become apparent.) He wanted to create a book that shared the opening and closing chapters, but where the 12 chapters in between were shuffled entirely at random, meaning that every single edition of the book reads in an entirely different order, with the story therefore unfolding in a completely different way EVERY SINGLE TIME. This feat results in approximately four hundred and seventy-nine million different combinations of the narrative. Think about that for a moment.

So while I will share with other readers how the story starts, and also how it ends, the journey between those two points will be entirely different for every reader. It’s amazing! It’s incredible! And somehow, with a lot of hard work and a whole lot of intellectual / mathematical / digital / randomisation data that frankly, I don’t have a hope of understanding, Groth has managed to achieve this goal. It is an impressive experimental work that I have never experienced before. Apparently there have been some precursors, but this is certainly the first I’ve read.

But it is not only the powerfully experimental form and structure of the book that is incredible. The narrative itself, the characters and the themes are also fascinating in themselves. The four main characters are Dock, Trace, High and Inkle. The book is set in the future, when the world is a very different place, and machines and technology rule. A small group of ‘free readers’ are determined to challenge the ‘oppressive ruling network of the metropole’ by scavenging and recreating fragments of printed and electronic stories, which have been banished under the new rule. As Ryan O’Neill says in the introduction, ‘… Ex Libris is a book about books and about the power of reading’.

When I read this story, it seemed to me that the chapters were in exactly the right order. I simply couldn’t imagine any part of the book being moved or shuffled around and it still making sense. And yet, I know for a fact that every other reader of this book (and it’s now in it’s third reprint) will have read essentially a very different story, but probably feels the same way – that THEIR version is the true story and anything else wouldn’t make sense. And this is the magic and the skill and talent of Simon Groth and his Frankenstein creation: every book is unique, every reader is gifted a unique reading experience, every story makes perfect sense. I don’t pretend to understand how he has done what he has done. The dedication and brain power and vision needed to complete this undertaking seems Herculean to me, virtually impossible to comprehend. And yet, here it is, in my hands, in black and white.

The genre is I suppose science fiction or speculative fiction, but the story is very human and accessible. The language and the plot – and even most of the setting – is recognisable. In fact, were you given this book and told or assumed it was just like a normal book, you probably wouldn’t notice anything out of the ordinary. But after having read it, if you were then given another edition, and then another, and another, and found that each was entirely different, and yet each was comprehensible, you would be astounded, confounded and bamboozled.

This is indeed ‘A book in half a billion’. My copy is numbered 00123. That’s unique. And my copy will tell the same story – with the same beginning and the same ending – as YOUR book, whatever your number. I truly don’t understand it. I’ve tried reading my copy at random – choosing various chapters out of order – and it doesn’t seem to make sense to me. It’s not the story I know. The plot is confused and the narrative is out of order. But rationally I know that for another reader, that is the way their story is structured and anything else for them would seem wrong. It’s a puzzle inside an enigma. It’s a remarkable achievement in storytelling. It’s a truly unique (and I use that word literally) reading experience. If you are at all interested in reading or stories or would like to give someone a (literally) unique Christmas gift, then this book is perfect. Your lucky recipient will never get another exactly like the one you give them. EVER. (Unless I suppose Groth sells more than half a billion copies, in which case, theoretically, there might be two identically-ordered stories?! But that’s highly unlikely.)

Independent bookstores such as https://avidreader.com.au/ or https://riverbendbooks.com.au/ currently stock Ex Libris (although it might be quicker to phone them rather than try to order online), or you can order direct from Simon Groth at https://www.simongroth.com/#/ex-libris/ . (Note: you can also order a digital version.)

I know that this mammoth effort took a lot of blood, sweat and tears (especially tears) and also a popular crowdfunding campaign to get the idea off the ground. But now, here it is, in my hands, in YOUR hands if you so wish. It’s rare to review a book that nobody else will ever read. I never thought I would have to do that. Never thought it would be possible or necessary to do that. But with Ex Libris, it is an honour to recommend that you purchase a book that I myself will never read, but that afterwards, we will be able to spend many hours discussing and dissecting a story that is both familiar in its origin and conclusion, but new terrain in terms of how we both experienced getting from beginning to end.