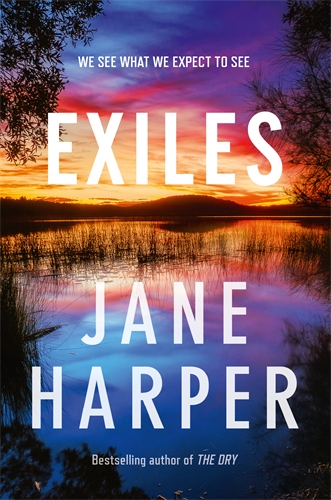 Author Jane Harper is the acknowledged queen of rural crime fiction and her latest (fifth) novel, Exiles (Pan Macmillan 2022) once again gives the reader a complex and intriguing crime, with plenty of twists and turns, this time set in country South Australia. Exiles is the third (and last) in the series featuring Australian Federal Police Investigator Aaron Falk. While this is a standalone story, if you haven’t yet read the previous two Falk novels (The Dry and Forces of Nature), I would highly suggest you begin there, as Exiles dives even deeper into Falk’s personal life and it is more satisfying to read this book knowing what has happened before.

At the heart of the book is the crime: at the busy local Marralee Valley Annual Food and Wine Festival, a baby is discovered late at night as the event is closing for the evening, tucked safely in her pram. Her mother has vanished into thin air. The story proper begins a year later, on the anniversary of Kim Gillespie’s disappearance. The investigation has stalled during the intervening 12 months, with no leads. Her friends and family decide to make public appeals to the visiting crowds at the following festival to see if anyone from the year prior might recall further information about possible sightings at the time. Investigator Aaron Falk had been in town the previous year for a friend’s baby’s Christening, which was postponed due to the tragedy. Now, a year on, Falk is back to celebrate his friends’ son (now a year old) and is inadvertently drawn into the subsequent appeal and further investigations. Marralee is a tight-knit community where everyone knows everyone. But as the story develops, Falk suspects that there are fractures under the surface of the idyllic local lifestyle, and as secrets are uncovered, he becomes inextricably involved in the lives of the locals and in examining the disappearance of Kim Gillespie 12 months earlier.

As with all of Harper’s books, there is of course more than one plot thread. Another local man was the victim in an unresolved hit and run six years earlier, and Falk becomes close to those who knew him best. And there is a large cast of characters with which he interacts. Who can he trust? Who is telling the truth and who is lying? How can a woman simply vanish from a large, crowded festival? And most importantly, why would she leave her six-week-old baby unattended in the pram? Something definitely feels off but Falk is not there on duty, and it is only gradually that he begins to unravel the events of that fateful evening. The reader learns the facts along with Falk, which keeps the tension high. The premise of the book is that ‘we see what we expect to see’, and the entire narrative pivots on this point: frequently, we do see what we think is there, rather than allow our minds to go to a less obvious perspective.

Harper is a brilliant crime writer who crafts her stories with care and attention. There are so many red herrings thrown in with actual clues, and it is only towards the end of the story that we begin to make the connections, to look back and re-read and realise what it is we’ve missed, or the incidents that we thought were crucial that were actually benign. In terms of a crime story, Exiles is very cleverly executed, with page-turning suspense and tight tension throughout to keep the reader guessing.

But this novel is more than a crime story; it is a personal story too, about Aaron Falk. Those who have read the previous two novels with him as protagonist (or seen him portrayed by Eric Bana in the film) will already have a reasonable idea of Falk’s background, his childhood and many of his formative life experiences. But Exiles takes us even deeper, giving the reader a very personal glimpse into his life outside of his work. We really connect with Falk and his ambition and motivations, and how he sees his life playing out.

It is not a spoiler to acknowledge that Harper has said this will be Aaron Falk’s last novel, but of course you must read Exiles to find out how and why he will not appear in a fourth book. This, also, is an impetus to propel the reading, as we are desperate to find out what happens to him, even more so because we feel such an intimate connection with him as the novel progresses.

One year on from the young mother’s disappearance, everyone associated with her – family, close friends – still feels the guilt that she was never found and no progress has been made into her case. Did she walk away and leave her newborn? Was someone else involved? Did she fall victim to misadventure? (Not uncommon in the outback). Whatever the case, Falk begins to believe that somebody knows something, and despite his misgivings about involving himself in the case, he can’t help himself – when an idea is nagging at his subconscious, he simply must follow his nose. When he and the others think back, the signs were there, the warnings were visible, but nobody had spotted them at the time. We see what we want to see.

Fans of Jane Harper don’t need me to tell them to buy this book – it has been highly anticipated. But whether for new readers, or existing fans, Exiles is a pacey and thought-provoking read (including some tender and intimate moments) with tantalising character development on a number of different levels, and a narrative that will shock and surprise.