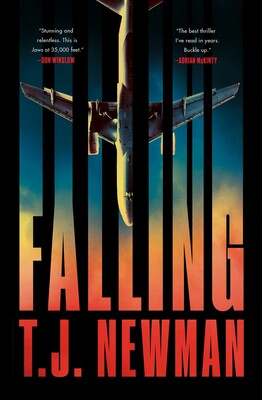 Falling (Simon and Schuster 2021) by T.J. Newman is an absolutely edge of your seat, runaway thriller with a knock-out premise and knife-edge anxiety. Written with inside aviation knowledge (the author was a flight attendant), Falling is the ultimate hostage/terrorist page-turner.

Bill is a pilot captaining a flight to New York with 104 ‘souls on board’. Minutes into the flight, he learns that his young family back home has been kidnapped and he is given a choice: crash the plane or his wife and children will be killed. Over the next several hours, a complicated plot informed by racial tensions and inequality begins, as we follow the story from several perspectives: from Bill himself as he struggles to find a solution that doesn’t involve killing his passengers or betraying his family; from flight attendant Jo, a hard-bitten and experienced woman who oozes strength and character; from her nephew Theo, a young FBI officer who she surreptitiously contacts for help; from Bill’s wife Carrie, determined to save her children, and supportive and loyal to her husband whom she believes will somehow do the impossible; from an air traffic controller at the heart of the action; and even from the terrorist (or terrorists?), who reveal heart-wrenching historical motivations.

Fast-paced, edgy and tense, with cliff-hanger chapters – this is gripping holiday reading (although I’m not so sure you should read it on a plane!)