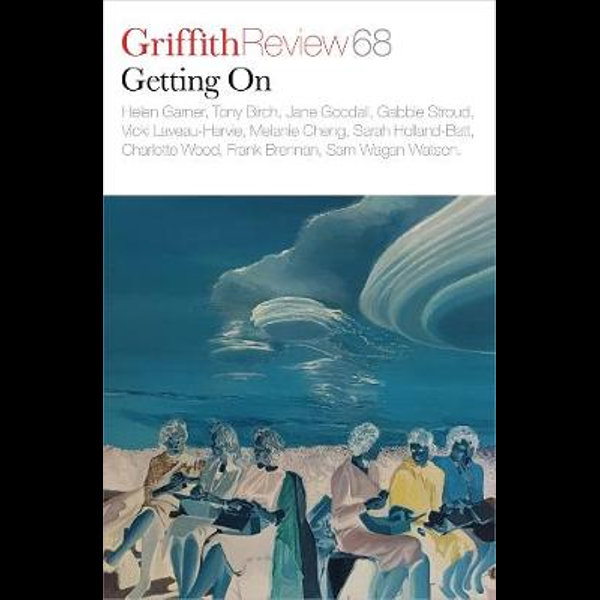 The latest edition of Griffith Review has hit the shelves: Getting On (68) and it is a really special publication, chock full of great writing and thought-provoking reading. Every Griffith Review is of a high standard but this issue seems particularly consistently excellent.

As always, it opens with an introduction by Editor Ashley Hay, who speaks about the themes of this edition: aging, the passage of time, senescence, sentience, Royal Commissions, the costs of an aging population, dementia, institutional care, social transformation, biology, maturity, mortality, loss, agency and the privilege of old age.

And then we’re into the submissions, beginning with the exquisite Helen Garner and her essay ‘The Invisible Arrow’. In her famous conversational style, Garner casually discusses the parallels between her own aging body and her ability to write, describing the degeneration of her body with the changing attitudes in her own writing – what she wants to write, what she is able to focus on, and what she wishes to record. Such simple words yet so powerful. Next up is Sarah Holland-Batt, with her essay ‘Magical Thinking and the Aged-Care Crisis’ (Utopian Fantasies and Dystopian Realities). Of course this piece of writing focuses on her recent crusade into the horrors of aged care in Australia, made particularly personal by the ill-treatment of her father in a care home. But she expands this subject to include references to many popular films, plays and literary explorations of the issue, and links the elderly’s apocalypse with a compounding lack of transparency, a failure of independent reporting requirements and soaring profits by aged care providers. Substandard care, reforms, staff training, staff wages, the fantasy of a comfortable and easy retirement up against the reality of a loss of independence and agency – all are examined with an observant eye and a compassionate empathy towards our elders. The next heavy hitter is Tony Birch, with his essay ‘Things of Stone and Wood and Wool’, a charming account of the comfort of objects, particularly in times of stress or anxiety, grief and loss. This essay – part memoir – recounts his relationship with his own elders, and his feelings about becoming older himself.

Bianca Nogrady reports on longevity and quality of life; David Sinclair on short-circuiting the process of aging. In ‘Dying Wish’, Andrew Stafford reports movingly about his mother, dementia and end-of-life choices. The hard facts of assisted dying are softened in this essay by the inclusion of his very personal experience with his own mother and concludes with a poignant recollection of the importance of physical touch. Jane R Goodall writes in ‘Joining Forces’ about the wrath of age meeting the passion of youth, and a conversation between Ashley Hay, Ruth Ross, Jay Phillips and Mayrah Dreise titled ‘Listening to the Elders’ explores wisdom, knowledge, institutions and the need for change, particularly how the Acknowledgment of Country, now so often used, could be personalised to hold more meaning. A memoir piece by Ian Lowe, ‘The Ball Still Swings’, enlightens us as to the allure of cricket for those in their seventies. Lisa Fenn and Ian Holland interview a number of elderly people in ‘Hearing Stories of the Past’, and Mark Aarons provides a moving account of his exploration into his own illness in the memoir ‘Solving My Medical Mystery’, a particularly confronting piece about pain and neuroscience, drug regimes and the limitations of medicine. Caroline Baum reports on producing flavoursome food for the elderly in ‘The Hungry Years’.

In ‘Killing Time’, an essay about Artificial Intelligence and the future of memory, author and medical doctor Leah Kaminsky asks how AI could potentially ‘help us lead more fulfilled and meaningful lives … instead of spending our sunset years just killing time until time kills us.’ Frank Brennan gives us a tender essay on ‘Contemporary Loss’, filled with poetic, literary and artistic references, and in ‘One Hundred Years of Sumbiotude’, Glenn A Albrecht discusses being a child of the Anthropocene and his use of the word solastalgia. I found this essay particularly fascinating (and thought of you, Sally Piper and Michael Livingstone). In her essay ‘In an Unguarded Moment’, Gabbie Stroud reminisces about the suicide of her brother thirty years earlier, and the reverberations of his loss still felt by her family today, even by her children who never met him. The memoir ‘On Looking Into Mirrors’ by Andrew Sant is a short, sharp piece on our changing appearance, and in another memoir ‘A Life in Books’, Kathy Marks talks travel, literature and the aging of her parents. Therese Hall discusses the challenge of homelessness in older women in ‘The Almost Homeless’, which looks at single women not quite – but almost – without a permanent dwelling. GP and author Melanie Cheng writes a confronting and self-conscious examination of her own prejudices and biases, and how they have changed as she has become older herself, in ‘The Human Factor’ (Empathy as a Therapeutic Tool). Beth Mohle explores healthcare and economics in ‘System Failure’, and a poignant memoir piece by Ailsa Piper, ‘Old Growth’, recounts seventy being the new fifty, and the absolute privilege of growing older.

In language reminiscent of the inimitable Helen Garner, Charlotte Wood give us an essay on ‘Experiments in the Art of Living’, a refreshingly honest look at aging, physical deterioration, mental agility, fear and dread. This edition concludes with ‘Bold Rage’, an essay by Ingrid Burkett about Generation X, and a marvellous memoir by Vicki Laveau-Harvie titled ‘A Vapour Trail Across the Sun’, which muses on her debut publication at seventy with her Stella prize-winning book The Erratics, her persistence, her writing life and what success has meant.

There is poetry by Young Dawkins, Sandra Renew, Anna McGahan and Alys Jackson.

Fiction in this issue includes ‘Death by the Book’ by Julie Maclean, a moving story of the life and ghosts of Charlie Bolt by Samuel Wagan Watson, and ‘The Town Turns Over’, a thought-provoking story from Laura Elvery’s forthcoming collection, Ordinary Matter.

The Picture Galleries in this edition are especially moving. The first, ‘Afterwards’, by Angus Mordant, explores the relationship between Raeleigh Mae Guzman (aged nine) and the death of her grandfather, Raleigh May, a Vietnam Vet. ‘The Creative Life of Eileen Kramer’ documents in photographs by Kylie Melinda Smith the passion and creative life of this woman born in 1914.

All in all, this edition of Griffith Review is an especially well-constructed and curated selection of writing from (mostly) older writers who are able to look at life and aging through the prism of their own years of experience.