Growing Pineapples in the Outback – Rebecca Lister and Tony Kelly 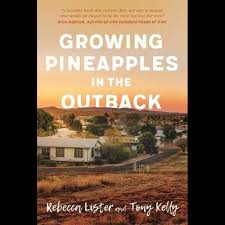 Partners Rebecca Lister and Tony Kelly have collaborated to write Growing Pineapples in the Outback (UQP 2020), a memoir depicting the years in which they made the decision to make a major lifestyle change by moving from Melbourne to Mt Isa in north-western Queensland to care for Rebecca’s aging mother, Diana.

In this searing, honest and heartfelt account, the two narrate alternate chapters as they describe their rollercoaster feelings, the physical difficulties they encountered, the friends they made along the way, the challenges posed by their respective work responsibilities, the guilt they felt towards their adult children, the inevitable conflicts with extended family members, and of course the delicate balance of sacrifice versus emotional connection that comes with living with and caring for an elderly parent in your childhood home town.

Both Rebecca and Tony had previously been social workers; Rebecca then became a playwright and arts producer, while Tony (now CEO of First Nations Legal and Research Services in Melbourne) was a lawyer specialising in native title, a job not without its own controversy in the outback. But the real heroine of this story is Diana, a witty, feisty and determined 92-year-old who loves crossword puzzles and game shows. With her dry sense of humour and her funny idiosyncrasies, Diana is portrayed as a loveable, frustrating, stubborn, gentle, caring and sometimes misunderstood woman who has experienced a life of sadness and tragedy, but who nevertheless maintains her sense of the ridiculous, and is certainly not going down without a fight.

The opening chapter, wherein Diana falls in the night and hits her head, exposes her frailty and vulnerabilities, and proves to her daughter Rebecca that she is ‘… in the right place, at the right time, doing the right thing …’ But it is not an easy journey. Rebecca and Tony arrive to a house in disrepair, filled with detritus and dust; Diana is a bit of a hoarder, mostly because she wants to save things that are precious, or keep mementos that have special meaning, or simply because she cannot be bothered to throw things away. The house whiffs of a lack of attention. Diana has settled into her surroundings with an ennui born from a lack of energy or motivation to do much past the bare minimum (and who could blame her, at 92?) But when the younger couple arrives and moves in, they not only begin to spruce up the house and make it a safer and more comfortable environment, they also have the effect of livening up Diana: reviving her interest in activities, encouraging her to get out more, and generally bringing a breath of fresh air to a life that was beginning to feel very tired and depleted.

What is perhaps more surprising to Rebecca and Tony, however, is what they get out of the exchange in return. At first, they believe they are sacrificing their city lives to adopt the role of carers, but as time goes on, they begin to appreciate not only the different pace of life in a rural area, but to really get to know Diana – as a woman and a friend – and not only as a mother (or mother-in-law).

One of the most interesting aspects of the structure of the book is the retelling by first Rebecca and then Tony of the same incidents, but from their differing perspectives. They don’t always agree, they each harbour doubts and anxieties about the scale of what they have taken on, there are the normal conflicts that play out in a long-term relationship about who is contributing more emotionally, financially and physically; who is sacrificing something to allow the other to flourish; who is giving and who is taking. All of this is laid out with a sometimes disconcerting frankness.

This book is an introspective tale that reflects on aging, illness, declining capacity and familial responsibility. As such, it is full of small details and minor recollections that I sometimes found inconsequential or a bit lacklustre, but then perhaps that is the point: that life as a carer can wear you down with the tediousness of the sheer weight of physical responsibility you undertake on behalf of another. This was balanced by the joy, wonder, humour and light-heartedness that both Tony and Rebecca separately found through spending time with Diana, and the obvious pep that they added to her life in her final years. This book will resonate with anyone with elderly parents, people in a carer’s role, or people who have for whatever reason been persuaded (with some misgivings) to move from the city to the country. It will be startlingly familiar to anyone who was raised in northern or western Queensland – the sweltering heat, the isolation, the small-town personalities, the limited employment opportunities, the absence of cultural activities found in larger cities. It is both a commiseration and a celebration of a simpler life, and a tribute to a woman who devoted her life to caring for others, but in the end was able to enjoy the care and attention of others.