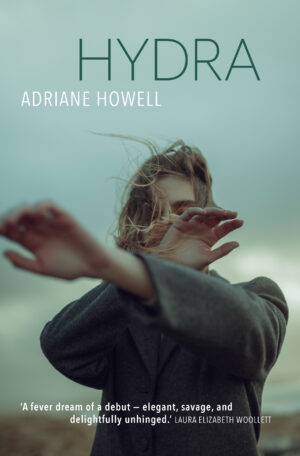 Occasionally you come across a novel that is part dream, part nightmare; part chilling sense of creeping dread, part poetic and aesthetic beauty. Such is Hydra (Transit Lounge 2022) by Adriane Howell, a highly literary story that celebrates the joy of language and the lengths to which an author can go in search of a mystery, while also managing to experiment with form and play with character.

Hydra reminded me a little of Labyrinth by Amanda Lowry and a little of Wintering by Krissy Kneen, so if you enjoyed either of those novels, this will no doubt appeal. It is strange, unearthly, ghostly and otherworldly, yet very much anchored in a pragmatic and tangible storyline.

Anja’s obsession has long been antiques but she has crossed the line once too often in her unorthodox practices. Finding herself untethered (and unemployed), she purchases an isolated beach cottage surrounded on all sides by a naval base. The dilapidated building is eerie and forlorn and sits atop the edge of a steep cliff that leads to the sea. In the garden sits an abandoned World War Two dinghy with a faded painting on the side – a three-headed serpent. The setting is mysterious and gothic.

Anja is intent on classifying objects according to the emotional response they inspire; she has based her antique career on this method and also adopts it in her personal circumstances. She takes a job in a rundown country secondhand market, she attempts to grow vegetables despite the corrosive salt air, she becomes increasingly unsettled by the disturbing presence (Man? Beast? Other?) that inhabits her property.

With themes of feminism, violence, fear, history, lore, superstition and revenge, Hydra is told in the first person by Anja, interspersed with typed and redacted Naval Intelligence Reports and official personal Audio Recordings and historical statements from Defence personnel, creating an interesting and unusual structure. It is as if Anja speaks directly to the reader, giving us a glimpse inside her mind – her desires, her fears and trepidations, her anxieties, the unique way she reads the world and assesses both the objects that surround her and the happenings that disturb her.