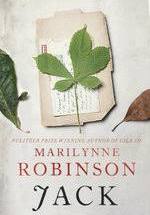 Jack (Virago Press 2020) is author Marilynne Robinson’s final book in her series of contemporary fiction that includes Gilead, Home and Lila. Set just after World War Two, Jack is the story of John Ames Boughton, or Jack as he is known, the prodigal son of the family, the wayward lad who has flitted in and out of previous books and is mostly known for his bad behaviour (according to the family’s standards). This book is a chance to delve deep into Jack’s story, allowing us to fill in the blanks of the long years of Jack’s absence from his family in the other books.

It is by no means a salvation story. Jack is indeed still a ‘drunkard and a ne’er-do-well’ who stays in cheap, temporary flop houses or sometimes sleeps in parks (or the cemetery). He survives by grifting, thieving, stealing, occasionally doing an odd job, and relies also on the regular envelopes of money that find their way to him via his brother, Teddy.

But all of that is background to what this story is really all about, and that is love. In St Louis, Missouri, Jack meets Della Miles, a young black woman with a ‘discriminating mind, a generous spirit and an independent will’. They meet by chance, several times; fate accords their relationship is meant to be. But he is white (and poor white trash at that) and she is educated, demure, responsible and black, an African-American high school teacher. In these days of segregation, their love is not only frowned upon, but it is against the law. Even to be seen together creates all sorts of trouble. And trouble has a way of following Jack around wherever he goes.

One thing they do have in common is that both their fathers are well-respected and well-known preachers, although of different denominations.

As with all of Robinson’s writing, this is a novel of great strength, power and beauty. The craft of every sentence is something to behold. The characterisations of Jack and Della are so intimately and finely detailed that we feel we know them inside and out. And as with Gilead, Home and Lila, Jack is a profound and philosophical treatise, an existential exploration of the meaning of life, why we are here, how we should treat one another, the rules of society, and the love that breaks those rules. I find Robinson to be a wholly wise writer, one who is able to articulate thoughts that I didn’t even know I had until she wrote them down for me to read aloud. This story is compassionate and empathetic, realistic and true, witty and sad, poignant and heart-breaking.

Jack is a hopeless, hapless bum, or so he believes, and so he thinks most others believe also. He is constantly ruminating about his many failures, and about how even his attempts to at least do no harm usually end up not only doing harm but often exacerbating a situation. He ‘… wondered for the millionth time how he had trapped himself in such a ridiculous life. Harmlessness is not for the faint of heart.’ Or: ‘Exhausting. How could a man whose life amounted to absolutely nothing have so many things to think about?’ Or: ‘There were the hours in which he resigned himself, not for the first time, to the fact that he had nothing to give anyone, that his life was an intricate tangle of futility …’ Or: ‘… they were caught in a great web that made every choice impossible.’

This is a love story that truly delves deep into the hearts and minds of the lovers, cataloguing every thought, every deed, measuring every word and action. It examines the beginning of Jack and Della’s story, casual and fortuitous, chaste and innocent, respectful and careful and shy. It slowly reveals their developing friendship and how this becomes a deeply-held love, and how they nurture that feeling despite each of their misgivings. The whole novel is touch and go as to whether they will ever touch, ever hold hands, ever kiss, ever open themselves up to each other. Like magnets, they are drawn together and then spun around and repelled apart. Jack believes he is no good for Della; he tries to avoid ruining her life. Della knows her family will be disappointed, angry and heartbroken if she falls for a white man. Their friends and family reiterate these warnings at every turn. And yet … still … their love blossoms, through words and food, poetry and walking, a joining of the minds as they discuss the great questions of life.

Marilynne Robinson is one of the greatest life writers of our time, and Jack demonstrates once again her inordinate talent and ability to expose to us a character’s innermost desires, thoughts and yearnings through intimate dialogue and careful circumstances, set against the backdrop of societal oppression and disapproval, racism, classism and religious beliefs. Jack is a simple story told through simple acts, yet one which rings loudly with truth and the questioning of the veracity of motivations. Unbelievably good.