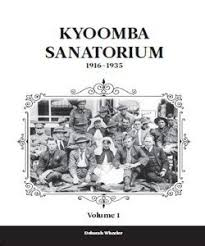 Author Deborah Wheeler has self-published two volumes of non-fiction research books on the Kyoomba Sanatorium. Beautifully-presented hardback editions, with a foreword by the Premier Annastacia Palaszczuk, together these two volumes offer a wealth of information about the Kyoomba Sanatorium which was located in Stanthorpe and utilised from 1916 to 1935 to treat returned soldiers recovering from tuberculosis and other lung diseases after World War I.
The books have been partly funded by The Returned Services League and offer unique insight into the operational aspects of the hospital, the personal details of those soldiers who attended, along with doctors and nursing staff, and a summary of the history of the original acquisition of the sanatorium and the development of it as a service purpose-built for soldiers. The result is volumes which are, according to the Premier, ‘an important resource [which] translates these stories into a narrative that is human, relatable and easier to comprehend’.
Both of the author’s grandfathers fought in World War I and this personal link has fanned Deb Wheeler’s curiosity about the Kyoomba Sanatorium. Before she began her research, very little was known about the facility, and she has strived to shine a light on this aspect of our ANZAC history. With the high altitude and cooler temperatures of the Granite Belt, many soldiers suffering from lung complaints were sent to Kyoomba from around Australia and New Zealand and even from Canada to recuperate.
The books include useful lists such as First World War Units, abbreviations and Regimental Numbers, an explanation of medals, and a chronology of the establishment of the sanatorium. Wheeler has identified individual soldiers who were inmates at the sanatorium during its 19-year history, either as in-patients or out-patients, along with medical staff and other local notable people associated with the hospital. She has collected details about their daily life at the sanatorium, their treatment, the excursions and special events that occurred, the keeping of the grounds, and the collection of buildings, equipment and machinery. Many of the records relating to the sanatorium were held by the Red Cross but lost in the floods, and so Wheeler’s careful collation of information is now an invaluable resource. The books include black and white photographs of the buildings, and detailed biographies of some of the major people involved with the sanatorium. In addition to this, some of Volume I and all of Volume II contain alphabetical entries for more than 550 soldiers, nurses and doctors involved with Kyoomba: formal photographs, biographical details, service details, records of injuries, and anecdotal information collected from documents or from surviving family members. My own grandfather is included: Samuel Wesley Lee (1894 – 1982), who served in both World Wars.
These two volumes are a great addition to the body of knowledge surrounding the ANZAC soldiers and their treatment after the war and would be of interest to anyone researching World War I history, or to those who have a personal connection to someone from that era.