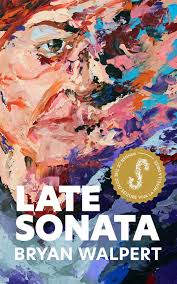 Late Sonata (Brio Books 2020) is the winner of the 2020 Seizure Viva La Novella Prize, by author Bryan Walpert. While Walpert has published short stories, scholarly works, science writing and poetry, this is his first novel-length (or novella-length) work.

Late Sonata is a beautiful rendering of two distinct story lines related to ageing. The main thread relates to married couple Stephen and Talia. Stephen, a writer, is rather reluctantly editing his wife’s last book, an academic study of Beethoven’s sonatas, while coping with her rapid deterioration from Alzheimer’s, and while they both deal with the loss of their son. As Stephen trawls through Talia’s meticulous notes and research, he discovers a secret that forces him to reconsider the truth about his family, at a time when he cannot confront his wife about it because her mind is too far gone to reason with her.

The secondary thread is Stephen’s own work of fiction about an experimental treatment for ageing. The narrative slips seamlessly between these two storylines, so that they almost appear as simultaneous, until we remind ourselves that one is the fiction Stephen is writing, and one is the fiction written by the actual author Walpert. The effect is a metaphysical sort of mental challenge.

The couple are long-term friends with Geoff and Anna, and their complex relationship dynamics gain increasing tension as the book proceeds, with the resolution being surprising and shocking and yet somehow full-circle serendipitous. With its focus on aging, memory and the power of forgetting, truth and deceit, marriage, infidelity and the legacy of long-term commitment, this slim book is a compelling portrait of the intimate lives of two people.