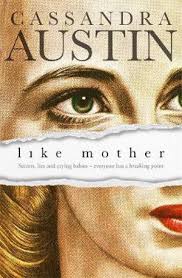 Like Mother (Penguin Random House 2020) by author Cassandra Austin is an unsettling, sinister story about mothers and daughters, about motherhood and babies. Set in 1969, when man has set foot on the moon but women are still expected to stay at home and play house (nicely), the tale centres on Louise Ashland, a new mother exhausted by her baby, feeling ignored by her husband, Steven, and feeling never left alone and always criticised by her mother, Gladys.

After a particularly traumatic few days of never-ending screaming, her baby girl Delores has finally stopped crying and is sleeping peacefully in her cot. Or is she? When Louise awakes from a few moments of well-needed rest, her baby is not where she left her. This begins the story – set over only one day – in which Louise’s frantic searching throughout the house again and again begins to demonstrate the unravelling of her character. Seen through the perspectives of Louise, Steven and Gladys, the events of the day unfold, and old secrets and transgressions are revealed. It becomes obvious that Louise is perhaps an unreliable narrator; but it’s just as likely that her husband or her mother are also unreliable. The reader doesn’t know who to trust or who to believe.

The novel’s unrelenting and page-turning pace and tension is increased by the drama of past behaviour and incidents recalled, current misbehaviours by certain characters, alongside the growing alarm for the whereabouts of the baby. Austin cleverly begins to draw the reader into a suspicion that Louise is unhinged or mentally unwell but then her behaviour and motivations seem rational and we start to doubt our thinking again.

The characterisation is very well done. Austin’s career as a filmmaker can be seen in the filmic and cinematic arc of the narrative, the revealing of character details, the tight pace and the dramatic tension. The writer has a sharp sense of humour and some of the characters’ foibles and dialogue are especially well-crafted.

The book’s themes explore the loneliness, responsibility and overwhelming exhaustion of motherhood; grief and loss; the patriarchal sense of financial duty; fidelity; shame; and the legacy of intergenerational trauma. The ending was a little too neat and lightweight for me – I would’ve welcomed a darker and more troubling resolution. But that said, the story does leave readers with a satisfying conclusion that questions the relationships between mothers and daughters and how missteps or mistakes in those bonds might be managed or repaired.