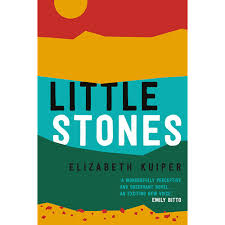 Little Stones (UQP 2019), the debut fiction novel by Elizabeth Kuiper, is a coming of age story that has such a strong sense of authenticity that it feels more memoir than novel. The author, like the narrator of the story, Hannah, comes from Zimbabwe and immigrated to Australia with her mother, but I have no idea if that’s where the similarities between her life and Hannah’s story begin and end. The way this book is filled with close observations, quirky anecdotes and believable depictions of particular incidents persuades me that even if the main storyline is very different from the author’s own life, many of the details and memories must be real.

Little Stones – a poignant title that makes sense in a passage almost at the end of the book where it relates to fixing something that is broken – is set in Zimbabwe during the reign of the dictator Robert Mugabe. Hannah, a white girl, lives with her mother and her beloved black housekeeper, Gogo, in what might be considered by some to be a privileged life – she attends a good school, they have a nice home and enough to eat. But it is a country of turmoil and chaos, even for those of privilege. Petrol queues snake for miles, rampant inflation means paying millions of dollars for basic necessities, curious tourists are shot for looking too closely or taking photographs of the Mugabe residence. And Hannah has an uncertain relationship with her father – divorced from her mother, her father seems even more wealthy and popular, but Hannah often feels ignored or invisible during her short stays with him.
When her grandparents are forced off their farm, and the household experiences a violent break-in, the reality of the tensions and instability of the country become untenable, and Hannah’s family plan ways to escape.
My son-in-law is a black Zimbabwe man and I loved the way this book treated both white and black residents with respect, acknowledging the inherent racism and the many assimilation problems, while also highlighting the extraordinary culture and customs of the country’s first people. Hannah may be white, but she understands her privilege, and through her adolescent eyes, we comprehend the many historical injustices on both sides. I also love the way the Shona language is emphasised throughout, not only through Hannah’s Shona lessons at school, but via the dialogue spoken naturally throughout the story. My granddaughter’s name, Anaya, means ‘rain’ in Shona, and it was so interesting to delve deeply into this culture that is now part of my own family story.
I didn’t read this book as a YA novel, although it certainly has that feel about it. Hannah is negotiating friendships, family circumstances, education, her identity, her ambitions and dreams, but the complex content makes it equally a book for adults. Elizabeth Kuiper has a keen eye for details and for the description of childhood experiences, seen now through the prism of adulthood, and the separation of another country and a different time. And she is able to deftly emphasise the similarities between a childhood in Zimbabwe and one in a country such as Australia, whilst also pointing out the differences. Although the main narrative is about the political situation in Zimbabwe, the author provides an intimate and finely attuned overview of a domestic situation, a family in crisis, the conflict between separated parents and parental fears and responsibilities, along with a nuanced commentary on the issue of race, the haves vs the have nots, and the notion of privilege and all it provides.