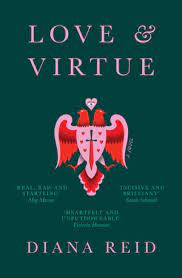 If you are a fan of the writings of Sally Rooney and Meg Mason, then you will love the debut novel by Diana Reid, Love and Virtue (Ultimo Press 2021). Set in a contemporary university setting, this is the story of ‘feminism, power and sex’ and as such fits into the zeitgeist of many recent books similar in style.

However, Love and Virtue is a step up from the many naval-gazing, introspective, self-obsessed books featuring adolescent or twenty-something angst. Like Rooney, Reid conveys something complex and layered about human behaviour, and like Mason, she does so with a sharp wit and an incisive and perceptive take on relationship dynamics.

Ostensibly a story about two young women, Michaela and Eve, who befriend each other in O Week as they live in next-door rooms at a residential college, this narrative expands outwards to encompass so many more issues. One girl is effervescent, self-assured and popular; one is shy, lacks confidence and wants to please. But it is the relationships they form with others – friends, lovers, teachers – that take this story to a whole new level. The book explores two major moral and ethical events and the repercussions of their aftermath, through themes of power, consent, reputation, wealth, class, betrayal and grief.

To say too much about the plot would be to give away spoilers, but if you followed the recent ‘Bad Art Friend’ controversy, there is a similar ethical conundrum here. The second moral question surrounds consent and power in relationships, an individual’s right to privacy versus exposing perceived wrongdoing, and whether the end ever justifies the means.

The book opens with an imaginative and original piece of sexual performance art. Although this could have tended towards gratuitous, it instead is conveyed in such a way as to exemplify one character’s personality and philosophy, and right from the very start gives us a clear idea of the principles of that character and how she chooses to present herself.

Most of the characters are painted in shades of grey, with their behaviour being alternately dislikeable and comprehensible. Reid has created characters with depth, nuance and originality.

The whole concept of friendship and what it entails, or whether circumstances alone can determine boundaries, is expertly deconstructed. The notion of moral responsibility is explored, against the background of the fact that both girls are studying philosophy subjects and so are naturally already engaged in deep thought about these issues.

The novel also examines class, wealth and power, the relationship between the three, and the agency (or lack of agency) that some characters endure with others.

I expect that the ending or epilogue will be divisive for some readers; it projects a scene sometime into the future, and gives us a glimpse of where the characters are at that time.

I thoroughly enjoyed this novel. The writing is of a high standard, the characters are compelling and nuanced, and the book is loaded with ethical, moral and philosophical questions which would make great bookclub discussion points.