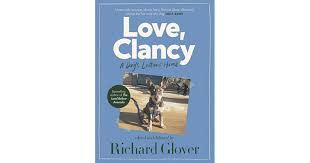 Many of you will be familiar with Richard Glover’s regular column in The Sydney Morning Herald (well, actually it’s written by his dog, Clancy, but Richard facilitates its publication). You may know him from ABC Radio. Or you may have read his hilarious but also heartbreaking memoir Flesh Wounds, or his take on 1970’s Australia in his book The Land Before Avocado (when young people could still afford mortgages because they weren’t forking out bucketloads of cash for smashed avo on toast). Richard Glover’s latest novel: LOVE, CLANCY: A Dog’s Letters Home (ABC Harper Collins 2020) is full of his trademark musings – characteristic wit and humour, combined with tender and poignant meditations on life, love and loss.

The death of Richard’s faithful dog, Darcy, which he wrote publicly about a few years ago, led to an outpouring of grief from the nation’s dog owners who could completely empathise with his human/dog bond. So when he decided to get a new puppy (or rather, when a plucky and cheeky puppy named Clancy decided to choose Richard and his wife as his new personal staff), Richard began documenting Clancy’s diary entries in a series of newspaper columns, which he has now collected into this delightful book, supplemented by Richard’s own reflections on Clancy’s views.

Clancy is a cute kelpie with attitude and more common sense than most humans (including, dare I say it, his owner). He is outspoken, knowledgeable, well-read, compassionate, tolerant of his humans’ rather slow uptake on training, and critical of many aspects and actions of people that seem so wrong when compared to a dog’s take on life. In some respects, he is very long-suffering when faced with Richard’s many shortcomings – his hypocrisy, his laziness, his inconsistency and the fact that he is, frankly, sometimes not that smart. But Clancy puts up with it all, with good humour, because he quite likes Man (Richard) and his companion Lady, and after a few years of training them, feels he is finally getting somewhere.

This book is an absolutely delightful, light-hearted, quirky, hilarious, moving and poignant conversation by a Man and his Canine Owner. We are privy to Clancy’s thoughts and feelings as he writes to his parents back in the bush about his new city life, the weirdness of humans, his friendships with other dogs, and his adventures with cheese, robotic vacuum cleaners and stolen legs of ham. Clancy’s wisdom and humour provide the perfect reading antidote to these ‘strange, unprecedented times’, as he drills down deep into what is important and makes us realise that it’s the simple things that matter, and that the way to be happy may often be overlooked or overcomplicated by humans, but is always embraced by dogs.

If you are a dog owner or a dog lover (aren’t they usually the same thing?), this book will resonate. If you are a cat lover, this book may yet convert you. If you need a reflective read that will make you laugh and maybe even cry, but in a good way, then this is the book for you.