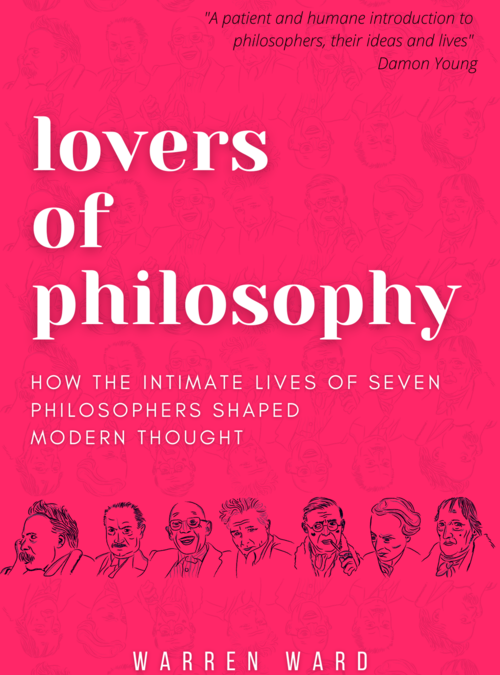 Whether you are a lover of philosophy, or you are interested in the love lives of philosophers, Warren Ward’s non-fiction, biographical account of seven of the world’s greatest philosophers, and the loves and lovers that inspired and sustained them, entitled Lovers of Philosophy (Ockham Publishing 2022), will inform, thrill and engage you with its sensual and well-researched exploration of ‘how the intimate lives of seven philosophers shaped modern thought’.

This book is such compelling reading that I could not put it down. Ward’s words read like a novel, with a through narrative that connects the stories of each featured philosopher and places their lives in the context of the times and the cultural and political circumstances in which they lived. Any concern that this topic might be dense or overly intellectual was quickly quashed by Ward’s lively and highly readable and accessible style, in which these real-life philosophers become characters in their own lives; characters we care about.

Ward is an Associate Professor of Psychiatry and his intense interest in the subject is both professional and personal. We are privy to both private and public details of his featured philosophers, including their families of origin and upbringing, their education, their impact on the world of higher thinking and, of course, their love lives and sexual liaisons and how these shaped their beliefs. Each chapter is divided into a number of shorter sections that focus on a particular topic or theme, and yet each chapter also seamlessly and chronologically flows from one to the next, with the result that the whole is greater than the sum of the parts, as we revel in this gift of philosophical ideas, debate, contention and theory; an esoteric and existential concept that is earthed by very human desires, impulses, sexuality and sensuality.

The introduction is comforting as Ward admits that even as a keen philosopher himself, he has been somewhat daunted by the ‘genius within’ the ‘difficult to decipher … philosophical discourse’. With this admission, we feel able to indulge our own vulnerabilities in approaching what could tend towards a rather complex subject. Ward has spent decades studying the lives of these philosophers, travelling to the places they lived and worked, researching their obsessions both romantic and otherwise, and yearning for a deeper understanding of the contribution they have each made to the world through philosophical debate. Fortunately for us, he has condensed this into an engaging and enjoyable read that covers several centuries and numerous theories as he attempts to view the larger questions through the perspective of personal desire, friendship, love and lust. He has ‘looked for connections between these philosophers’ experiences of intimacy and the way they came to see the world.’ Furthermore, ‘the overall structure of the book, exploring the lives and ideas of seven philosophers in chronological order, also provides the reader with an easy-to-follow overview of the progression of ideas in continental philosophy.’

Ward begins with Kant in the mid-1700’s: the significance of his life-long infatuation with the Countess, his rise from poverty to palace life, his many other romantic dalliances, his silent decade, and his contribution to the philosophical debate between science and religion. His published Critiques would contribute to his reputation as one of the world’s most renown, influential and celebrated philosophers.

Next is the German philosopher Hegel, ‘the first philosopher to place the study of history firmly within the province of philosophy’. Born in the late 1700’s, Hegel’s early life and philosophical investigations were influenced by the French Revolution and the many romantic desires (both requited and unrequited) of his life. With the approach of not only Napoleon but other more pressing, personal issues of racy affairs, an illegitimate child, penury, increasing fame and torn loyalties, Hegel’s misadventures, fickle entanglements and resultant tragedies (including a cholera pandemic) punctuated his publication of new philosophical thought.

The third philosopher under the microscope is Nietzsche, connected to Hegel through Marx. ‘Nietzsche was a complex and sensitive man whose outlook was at least partly coloured by his experiences of being repeatedly rejected in love.’ Born in 1844 into a series of childhood traumas, Nietzsche was eventually one of the youngest ever professorial appointments and lived through the Franco-Prussian War, several complicated love triangles, romantic rivalries, syphilis, a stint in an asylum and a doubtful connection with Nazism.

Heidegger, the first of the existentialists, was born into the century of two major world wars and a swathe of technological and industrial advances. Once again, this philosopher’s romantic entanglements would shape and influence the way he thought and wrote. Despite (or perhaps because of) his marriage, an erotic student affair, a more mature liaison, other flings and then news of his own wife’s infidelity, Heidegger continued to contribute to philosophical debate throughout the rise of Adolf Hitler and all the accompanying horror, until his death in 1976. Ward interviewed Heidegger’s 92-year-old son in 2013, an original source which adds much to this chapter.

Another philosopher caught up in World War Two and anti-Semite feeling was Sartre, who fought in the French Resistance against the Nazi occupation of his country. With the seemingly common recurring theme of childhood trauma and misadventure, Sartre’s voracious early reading and later rebelliousness, combined with his sexual voyage of discovery, led to perhaps one of the greatest romantic liaisons between soulmates – Sartre and Simone de Beauvoir, ‘his lover, favourite companion, and intellectual partner’. Beauvoir, herself a philosopher of equal fame, was the inspiration for Ward’s first literary explorations into the potent combination of love and philosophy and is given appropriate and significant space in this book. Her own sexual adventures (with women and men), her writing (full of ‘racy … seduction, jealousy and intrigue’ and her stand on feminism make this a particularly fascinating chapter. For Sartre, a string of simultaneous affairs, drug-taking and fame led up to his death in 1980, with 50 000 people attending his funeral.

The philosopher Foucault attended Sartre’s funeral precisely to prove the point that he disagreed with so much of what Sartre represented. Diagnosed early with ‘homosexuality’, then treated as a medical and mental illness, Foucault’s sexual explorations led him to write extensively about sexuality – it being one of the deviant or rebellious qualities treated as various forms of madness by the establishment – and the description of him facing the board to defend his thesis is one of the most compelling and interesting passages in the book. His long-term relationship with his companion and lover Defert also contributes to his rich and controversial life of protests in solidarity with students, social activism and rebellion. The sixties were a heady time, and led to a surprising invitation for Foucault to head up a university unlike any other educational institution. His subsequent passionate advocacy for maligned groups, such as prisoners, and gay and lesbian people, dovetailed with his earlier writings on the treatment of any difference as ‘madness’. The 1980’s AIDS crisis did perhaps predictably not turn out well for Foucault.

The book’s final philosopher, Derrida, again began life with a fractured identity and trauma. With his life marred by cultural confusion, the sentiments of war, rootlessness and despair, Derrida’s revolutionary thinking and writing was fuelled by a ‘multitude of lovers’ and extramarital affairs. One extraordinary young woman who would come to define much of his philosophical and romantic conflict caused him to test his convictions regarding the sanctity and responsibility of life and family. A controversial documentary about his life aired in 2002 when he was 72.

On speaking about this, Derrida made a comment about being interested in the conversations the great philosophers might have had about their own sex lives and love interests, and this brings this book neatly to full circle, because although Ward did not stumble across that comment until almost the end of his research, it is indeed exactly what he himself had been attempting to do for so many years. And with a quite beautiful evocative depiction of a recent trip with his daughter to the school in Paris where so many of these great philosophers studied, Ward completes this curious, informative, satisfying and entertaining treatise on seven of the most well-known philosophers and the people they loved.