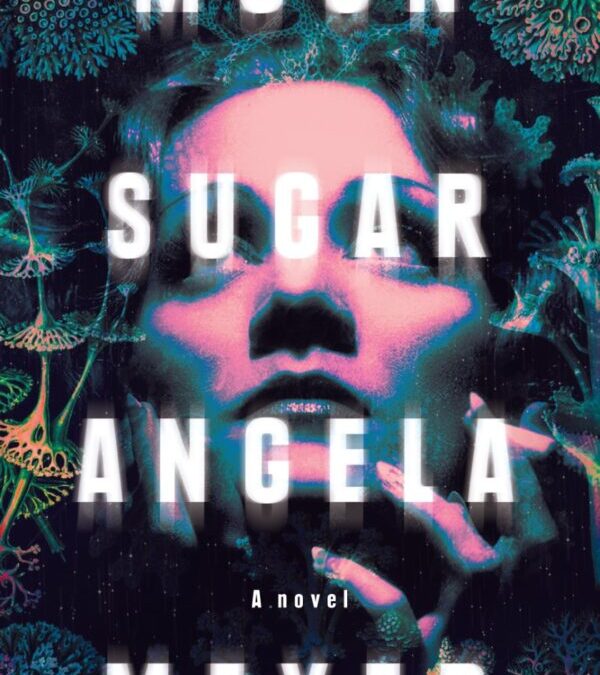 Author Angela Meyer has a reputation as a writer who creates stories with shifting genre boundaries; stories with heightened passions and senses; stories that are set in a world we know but also give us glimpses of magical fantasy combined with scientific possibilities. Her latest novel, Moon Sugar (Transit Lounge 2022) is absolutely true to form – a mind-bending and complex tale of sexuality, identity, esotericism, mind-altering drugs, cults, sex work and the power of imagination, wrapped up in a kind of crime/chase/mystery that propels the reader along at a fast pace. There is a lot to unpack in this novel; Meyer strays down various paths of curiosity and the reader is never quite certain where the characters or the story will end up.

The themes of Moon Sugar include desire, sacrifice, loyalty, friendship, risk-taking, ambition, greed, innovation, capitalism, motherhood and secrecy, but they begin with grief. Mila is 40, single, childless and broke. The life she always imagined has not happened the way she planned. She feels disappointed in herself, and she feels she has disappointed those around her. Physically yearning the touch of another after the break-up of a long-term relationship, she impulsively joins SugarMeetMe, a site for older ‘Sugar Mamas’ to connect with younger men. She begins to see Josh, enjoying the sweet, satisfying sex with no strings attached. But within days of the novel’s opening pages, Mila is horrified to discover that Josh is missing and presumed drowned in Berlin, his shoes and a note found at the site. The police rule it a suicide, and Mila hears the news only through social media, with Josh’s friends posting tributes and memories. While she had known he was on an overseas holiday, a suicide seems completely out of character to her. But how well did she really know him? What secrets or hidden lifestyle might Josh have had about which she knew nothing?

The news is particularly distressing because she had felt that recently they had been forming some sort of special attachment; but then maybe all his ‘clients’ felt that way? Mila is grieving and has no-one to turn to, because she has never revealed that part of her life. Then guilt sets in – shouldn’t she go to the police and tell them what she knows? What if his death is somehow connected to SugarMeetMe?

The second voice in the book is Josh’s housemate, Kyle, a gentle, naïve soul who loved Josh despite his exotic lifestyle and who was booked to join him in Europe a few weeks after he heard that Josh was missing. The airfares, tickets and accommodation are all paid for so Kyle decides to continue with the trip anyway, at the very least to pay his respects to his friend and what they had planned to do together, and at most to perhaps discover something about his mysterious disappearance.

But that is not where this story begins. The first chapter is actually set 24 years earlier, a short section about a single dad and his motherless daughter, his estranged friend who used to share with him time in space as an astronaut, and a strange lichen that engenders some sort of magic. Meyer intermittently returns to this part of the story throughout the main narrative, and eventually the connection becomes clear and the two interweave as one.

Meanwhile, Mila and Kyle connect via social media and decide that since they are both on a mission to find out more about Josh, they may as well do it together. They make an odd couple, and some of the book’s best sections are the interactions between these two seemingly incompatible people. They travel to Prague, Budapest and Berlin, following Josh’s last online posts and gathering information from people who met him along the way.

Mila has secrets of her own, which are only gradually revealed. As she and Kyle delve deeper into an unknown and dangerous situation, she must come to terms with what she has done in the past, and what that might mean for her future. The narrative features psychokinesis, the affects of drugs, synesthesia, symbiosis, consciousness and an exploration into the power of sensory perception, cognitive ability, scientific experiments and group think/behaviour.

Whether this book is read as a missing person story, or else as a fantastical tale in the realm of mysteries beyond our understanding, it will always be based on an intimate and thought-provoking meditation about how we understand ourselves and our relationships with others, the dynamics and imbalances of connections, the lack of knowledge about our minds and of what we might be capable.

Moon Sugar is one of the first books I’ve read that is firmly contemporary in terms of references to the pandemic, to digital technology and digital footprints, and to the exploration of non-binary sexuality. Feminist and ageist and sexist themes appear. There is much internal contemplation by characters about what they want from the world and what they owe; their responsibilities and their rights; about consent, expectations, obligations, rage, fear and desire.

This is a book that will challenge your ideas about all of these things, as well as providing a rollicking chase story that picks up momentum with every chapter. There is much that I felt I did not understand, but I think that’s the point of this creation – to stretch us as readers to the limits of our comprehension, and to imagine possibilities so strange and bizarre that they are incredulous. What if? What if? What if?