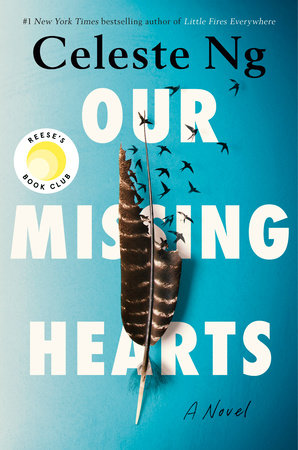 I absolutely adored Little Fires Everywhere so was keen to buy my copy of Celeste Ng’s new novel Our Missing Hearts (Abacus Books 2022) from Avid Reader. Ng is a writer of the highest calibre, managing to combine beautiful, literary pages with an accessible and intense plot, and this book also carries beneath its sentences some very contemporary and important issues.

The story is set in the United States in the near future, some years after a major ‘crisis’ (both economic and social), where for a decade citizens have lived under the new stringent PACT laws, written to preserve American culture, particularly from any Asian influence (but especially Chinese). In this society of fear and watchfulness, 12-year-old Bird lives with his white father, Ethan, in a small apartment in a building owned by the university where Ethan works reshelving books in the library, a long way down from the previous work he did as a professor of linguistics. Bird’s mother, Margaret Miu, a Chinese-American poet, disappeared from their lives three years earlier. Ethan has distanced himself from everything they once shared as a family and encourages half-Chinese Bird – or Noah – as he is renamed, to do the same. Bird’s mother is never spoken of; it is as if she never existed. But in the opening pages of the book, Bird receives a cryptic drawing that he feels certain is from this mother that he barely remembers, and the novel charts his journey of not only trying to find her, but find out what happened to her, why she abandoned them and her mysterious connection to the city-wide anti-PACT slogans that appear frequently overnight and are cleaned away by the next morning. Ranging from yarn bombings to graffiti, the slogans all refer to OUR MISSING HEARTS in some way, a line from one of his mother’s books of poetry.

But Bird’s attempts to find out any information are hampered, not least because any books or websites containing positive information about China or Chinese history have been removed from shelves or taken offline. Censorship is at the centre of the new form of control wielded by the government. Libraries are still places of sanctuary however, and as Bird discovers, may yet hold the key to a network of underground dissidents.

The most disturbing and alarming aspect of this book is that mixed race children are being removed from their parents, or from people who support the anti-PACT movement. As Ng says in her author’s note, ‘There is a long history, in the US and elsewhere, of removing children as a means of political control.’ Drawn from real life examples such as the stolen generations of First Nations people, government boarding schools for Indigenous children, the separation of migrant families at the border and the iniquities of the foster care system, and also referencing well-known works of fiction such as The Handmaid’s Tale, this frightening scenario is widespread. Families rarely speak up publicly however, as to do so would only prove that they are unfit to raise the children that have been taken.

One of the best characters in the book is feisty Sadie, a stolen child who has fled from foster home to foster home, trying to find her parents. She befriends Bird when they are younger and she becomes an important figure for him as he attempts to find out about his mother.

These issues – horrific and yet with a basis in what’s going on in different countries all over the world right now – elevate this novel from an engaging story to a complex examination of our policies, our prejudices, our politics and our personal positions on dubious laws. We all know that might is not always right but do we have the courage of our convictions to stand up and speak for those without a voice?

As the story unfolds, the horror and terror operating in plain sight is revealed, and the tension builds to a nail-biting climax that will have you turning the pages in anticipation and dread. Only one thing is certain: not everything is as it seems. This is an absolutely remarkable and thought-provoking book that invites you to question our own historical and current political and social systems.