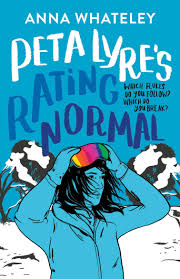 Peta Lyre’s Rating Normal (Allen and Unwin 2020), the debut novel by author Anna Whateley, is a Young Adult own voices story that allows us access into the head of 16-year-old Peta Lyre, who has been diagnosed with all the letters of the alphabet…ASD, ADHD, SPD…in this coming of age tale about friendship and family, growing up and getting it right, and making and breaking the rules. It is also a tender and poignant LGBTQI (more letters!) narrative that explores young love. With themes of neuro-diversity, Autism Spectrum Disorder, romance and more, this book is a wonderful insight into adolescent life, specifically adolescents who feel different or disconnected.

Peta Lyre is not your typical teenager, and she often experiences frustration while trying to navigate the world surrounding her, a world that is not designed to accommodate the unique way her mind works. But she has had the help and attention of therapists for almost her whole life, and with that help, she can ‘almost pass as normal’, or at least get by enough to not attract attention. But when a new girl starts at her school, Peta’s emotions are challenged and she has to try harder than ever to fit in with societal expectations. The school ski trip is confronting in some ways – in that she has to attempt a whole range of new and scary experiences, but it is also a triumph – in that she develops a new-found confidence and realises that a ‘normal’ life might be possible for her after all. But when her world again crumbles, she must decide whether to keep following the rules that have always kept her safe, or whether to take a risk and create her own normal.

This is a beautifully written, simple YA book that will resonate with all kinds of teens, both ‘normal’ and neuro-diverse, both straight and gay, both those in stable living circumstances and those with less supportive environments. Peta’s best friend, Jeb, is a warm and engaging character, full of yearning and disappointment and optimism and dreams. Extenuating family circumstances mean that Peta lives with her aunt and her toddler niece, who provide a lovely, secure backdrop to Peta’s many anxieties.

In one section, Peta’s need for order and consistency is outlined in painstaking detail by how she places her belongings; in another, Peta allows herself 30 minutes of worry time to deal with her anxiety, and this is broken down into segments which give us a glimpse of how very hard it is to be in her headspace. Peta thinks: ‘My room is the safest place my body has. My mind doesn’t really have a safe place.’ There are times when people use expressions with which she is unfamiliar (like ‘third wheel’) or phrases that she takes literally, when they are meant figuratively or metaphorically, causing more uncertainty and doubt. She notices things that others don’t (in one scene, even while engrossed with her friend dancing inappropriately with a boy, Peta can’t help but notice that ‘He’s not feeling the music at all. He’s out of time by at least a third of a beat…’) In one passage, Peta notes ‘Rules and people are puzzles, and I have to figure them out too.’ Everything is designed so that she doesn’t ‘look so wrong in the first place’. Every time she sees her therapist, she adds another rule to her memory of ‘why people do so many strange things’ so that ‘If I get it right, then I’ll look normal’. Her head ‘swims with mixed-up messages and unsteady boundaries’. She has trouble gauging the reactions of others and interpreting their meaning and intent.

Structurally, this novel sustains our interest not only through the storyline but through the way the chapters are put together. Most of the chapters are set in the current time, and many conclude with Peta giving herself a rating out of 10 for how ‘normal’ she is feeling that day. Sometimes, when things have gone well, it might be 9/10 or even 10/10, but often she feels that she has failed in some way, and her perception of her ‘normal’ rating is as low as 2 or 3/10. These are the days that she thinks she has missed the social clues, misread people’s expressions, misunderstood the meaning of their words or otherwise failed to keep up her façade of being ‘normal’. I think that this rating system will totally resonate with readers (every adolescent!) as they recognise their own struggles for acceptance and for fitting in with those around them.

Another structural point is that every few chapters, we are given a flashback chapter that exposes something about Peta’s life when she was younger (nine years ago, or six years ago, or four) which provides some insight into how she came to be in the situation she is in now.

And the third structural point, and probably the most effective, is that every so often, Peta’s thoughts are italicised throughout the text, and these thoughts are either: (a) mantras obviously instilled into her by her therapist about how to appear ‘normal’ eg ‘Long pauses in conversation might make it seem you are uninterested’ and ‘If you like someone, be a mirror for their body language and emotion’; or (b) her mind racing ahead and inventing a situation that might occur but that hasn’t actually happened. Sometimes this is a worst-case scenario that she can’t avoid thinking about, that plays out obsessively in her head as something bad that is about to happen, and sometimes it is a best-case scenario, or something that she would love to happen but is frightened to think about too much in case she jinxes it and it doesn’t eventuate. In this way, we as readers are given an extraordinary amount of access inside Peta’s head, to her thoughts and her feelings. We understand her insecurities and her lack of self-confidence. We are privy to her relentless need to analyse situations and people to ensure she is ‘acting normally’. We comprehend her behaviour that outwardly might seem extreme or bizarre, but because we are perceiving it from inside her head, seems perfectly reasonable.

And I think this is the great gift of this book: understanding, compassion and empathy. Neurotypical readers will gain valuable insights into their neuro-diverse friends, children and parents, into their thinking processes and their seemingly random actions (which of course, once explained, are not random at all). And neuro-diverse readers will embrace this ‘own voices’ story that so carefully and thoughtfully empathises with their day-to-day struggles to be accepted while still being different.