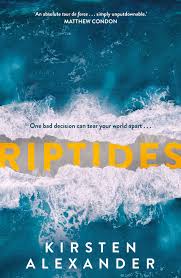 Kirsten Alexander’s novel Riptides (Bantam Penguin Random House 2020) begins with a terrible accident: Abby Campbell (married with children) and her brother Charlie are driving to their father’s farm on a dark and rainy night when they swerve into the path of another car which hits a tree, killing the pregnant driver instantly.

This is a story where not only do we know very early on that an incident has occurred, but we know the who, the why, the what, the when and the how. Rather than a crime to be solved, the story centres around the decision that Abby and Charlie make that night after the crash, and the repercussions that reverberate afterwards for everyone around them.

The absolute strength of this book is the setting and time. Set in Queensland in 1974 / 75, the story occurs against the backdrop of the corruption of the Joh Bjelke-Petersen government and the police state that turns a blind eye (or is actively involved in) drugs, crime, murder and prostitution. The story also features Darwin’s 1974 Cyclone Tracy, another significant and life-changing event of the time. Alexander writes masterful description of place and time – the Brisbane weather, the heat, the storms, the wildlife, both the urban inner-city and the countryside – she transports the reader to Queensland as much as books by Andrew McGahan or Nick Earls. And she entirely captures the mood of the seventies – the music, the food, the fashion, the lifestyle.

The dialogue too is very strong. Alexander has a keen ear and faithfully replicates the language and mannerisms of Queenslanders of that era. She is frequently funny, giving the characters a dry and witty humour that sharpens our sense of their personalities.

The plot is very readable although perhaps a little predictable, and at times some of the characters’ actions or motivations seemed slightly implausible or included some unlikely coincidences. But this was not enough to detract from the enjoyment of the story, and there were enough twists to keep it interesting. This is a tale with a moral dilemma and ethical questions at its heart and I would have liked a deeper interrogation of those themes. The critical event at the opening is one which could happen to anyone and leaves you wondering ‘what would I have done?’, but I don’t think the most was made of the opportunity to explore the ramifications. One small structural criticism is that because the sections marked ‘Charlie’ or ‘Abby’ are both in first person, it was sometimes difficult to remember which character was narrating, especially as they were both relating essentially the same elements of the story. But perhaps this was done deliberately in order to emphasise the discomfort of two close people, siblings, recalling and dealing with a confronting event in two different ways (much as in Imbi Neeme’s recent The Spill).

Queenslanders will enjoy all of the familiar references to places, pubs, buildings, people, landmarks, suburbs and customs. And all readers will engage with this story that is not quite a crime whodunnit but more of an analysis of the repercussions of a crime, tied up in a highly accessible and readable book. With themes of aspirations, choices and consequences, all set during a time of social upheaval and change, this book is a reminder that secrets are dangerous and that truth can be either damning or liberating.