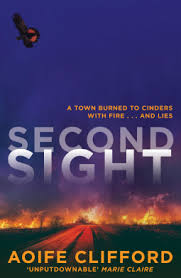 Second Sight (Simon and Schuster 2018), the second crime novel by Irish/Australian writer Aoife Clifford, is set in an Australian country town where everybody knows everybody else and they all remember their past shared histories.

Lawyer Eliza Carmody is back in Kinsale to work on the biggest case of her career, but faces a backlash because she is defending a large corporation against a class action by the people of Kinsale related to a terrible bushfire that took lives and left an indelible trauma on the townsfolk. Eliza is only back for a day when she witnesses an old friend commit an assault. But like the Russian proverb, nobody lies like an eyewitness, and Eliza is forced to confront the truth of what she saw. The police are investigating the discovery of human remains at the local historic homestead, nicknamed The Castle, and Eliza is still devastated by the disappearance of her friend Grace when they were adolescents. Everyone thought Grace ran away, but as new evidence comes to light, and the mysteries deepen, the investigations into all the different crimes begin to weave together, and Eliza must face confronting truths about her own family. Everybody lies – and as the narrative progresses, we understand just how many people are lying about so many different things. And sometimes the truth is more painful than the lies.

With the recent terrible bushfires, this book is timely, even though it was released two years ago. Clifford deftly depicts the power and trauma of fire with sensory descriptions that are lush and evocative. The plot and sub-plots are complex, pacey and full of tension. The small-town setting sits well with other recently published Australian crime novels. If you enjoy writers such as Jane Harper, Garry Disher and Chris Hammer then Second Sight will appeal.

The structure of the narrative is really interesting. Interspersed with the main story are sections – flashbacks – from what happened the night Grace disappeared, New Year’s Eve 1996, but each section is written from the perspective of a different character. So while we have the main story told from Eliza’s perspective, these shattered images of that one night delivered by several different people who were there, all giving their own version of what happened, or what they saw or heard, come together to form a mosaic that slowly builds until by the end of the novel, it is a glittering ball of sharp shards of truth.

With a large cast of characters, authentic and pithy dialogue, some humour and a romance thrown in, this novel is a great addition to the Australian literary crime scene.