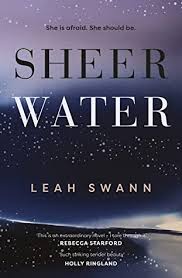 Sheer Water (4th Estate Harper Collins) is the debut adult novel for author Leah Swann, although she has published a collection of short stories, a middle-grade series and poetry. Sheer Water is a fast-paced crime novel that I raced through, pausing only to savour the extraordinarily beautiful descriptive sections of prose that punctuate the action.

The story at first appears deceptively simple: Ava and her two young sons, Max and Teddy, are driving to their new home – and their new life – in the sleepy town of Sheerwater. They are obviously running from something, or someone, but what or who is not immediately clear. At any rate, within the first few pages, a light plane crashes onto the highway practically in front of their car and Ava of course decides to stop and render assistance. This opening description – the carnage of the wreckage, the terrible injuries – is heart-stopping and tense. There is smoke, fire and confusion. But other first responders quickly arrive on the scene and Ava is able to return to her car, where she has left Max and Teddy, and their dog, Winks, under strict instructions to stay put.

But her children are not in the car. Only Winks remains.

And so begins the awful search, as Ava tries to establish what could have happened to her sons in those frantic moments, whether they might have run off or been taken, and if so, by a stranger or someone known to them. It is every parent’s worst nightmare. And as the story proceeds, we identify strongly with Ava and her primal instinct to find and protect her boys.

The whole novel takes place over only three desperate days. What is unusual about this book is the structure – the main passages are from Ava’s perspective, but we also hear from the point of view of several others involved in the story, including Max, Simon (a man who is first on the scene to help with the plane crash), and Laurence (Ava’s husband). Swann handles these shifting perspectives really well and allows us glimpses into the minds of the other main characters, while gradually revealing more of the plot. While some of the characters are drawn with a little too much caricature, generally the underlying motivation of their decisions and actions are well-thought out and plausible.

Each of the three days / sections begins with a paragraph or two of beautiful, literary descriptive prose depicting the landscape, the sea, the sky and the birds, particularly the migrating shearwaters. These passages serve to separate and mark the days but are also quite lovely and metaphorical writing.

The ending is shocking and devastating and not at all what I expected.