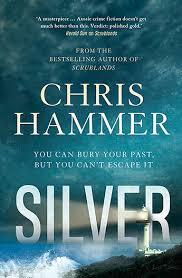 After being a journalist for 30 years, Chris Hammer’s second novel Scrublands took Australia by storm, and now he has released the sequel Silver (Allen and Unwin 2019). Although this crime story can be read as a stand-alone, readers of Scrublands will delight in the fact that Silver continues the story of journalist Martin Scarsden and his new girlfriend Mandalay Blonde. Mandy and her young son Liam were memorable characters in the previous book and it is gratifying to see their backstories and lives fleshed out even more in Silver.

In fact it is Mandy who has drawn Martin – somewhat against his better judgment – back to his childhood home of Port Silver. After inheriting an old house on a clifftop in the seaside town, Mandy is keen to relocate and start again after the shocking and traumatic events of Riversend in Scrublands. And Martin is keen to be a part of her new life.

But from the first day of their arrival, when one of Martin’s old school friends is found murdered, and Mandy appears to be the main suspect, their sea-change transition is not easy. The book covers the events of a single week, as Martin tries desperately to clear Mandy’s name from suspicion and find out who really killed his childhood friend. The plot thickens when a new crime – involving sex, religion, drugs and celebrity – visits the town, and Martin finds himself ensconced in another scandal. The media – including his previous employer – descend on Port Silver, and Martin once again is torn between following his journalistic nose and intuition to dig out the facts of the story, and attempting to protect those close to him.

All the while, his past haunts him with its memories. His immediate family are long gone from Port Silver, lost in terrible circumstances. He has been estranged from his Uncle Vern for many years and meeting him again dredges up recollections he would rather forget.

The book provides a wonderful experience of looking at the place of our childhood through the prism of all the experiences that have shaped us since we left that place. Hammer thoughtfully includes a detailed map of Port Silver and its environs at the beginning of the book, and I found myself constantly referring back to it to help orientate myself as to the exact location for each scene.

Scrublands was an ambitious novel, almost overwhelming in its scope. I found Silver to be more focussed and contained. There are still a lot of characters and there’s a lot going on – red herrings, possible victims, suspects, incidents that may or may not be related to the crimes – but Hammer has done a fine job of keeping the reader close, and taking us along, step by step, as the eventful week unfolds. His emphasis on the relationship between Martin and Mandy, with all its doubts and flaws, feels authentic. His forensic detailing of a criminal investigation is meticulous. And of course, as with Scrublands, Hammer’s years of experience as a journalist and international investigator shine through very clearly as he negotiates the tricky and sometimes back-stabbing world of the media, ever hungry for the next story. Deadlines, by-lines, the role of news photographers, the minutiae of the news cycle, the jostling for scoops, the sensationalism, the enthusiasm to publish information about suspects before the cut-off when it becomes prejudicial, all of this is written and informed by lived experience.