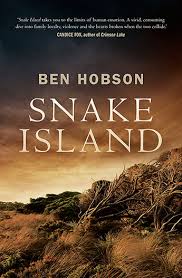 Most writers find themselves inevitably drawn back to similar themes in their work. They might tell completely different stories but with the same questions and curiosities at their heart. For Ben Hobson, that magnetic pull is to explore masculinity: What is it to be a good man? How do you learn the important lessons that help you become a good man? He likes to interrogate the issue of fathers and sons, of generational trauma, and of intergenerational role modelling that shapes children into the adults they become. His second novel Snake Island (Allen and Unwin 2019) is in many ways so different from his debut To Become a Whale, and yet there is a symmetry joining them – the big, profound questions around good and evil, guilt and revenge, responsibility and sacrifice.

Snake Island is a crime novel with a difference. The criminal action in this book, and the intense, confronting and relentless violence, is ongoing throughout, like a pressure cooker reaching its peak. This is not so much about solving a crime or uncovering the secret predator, as watching the blood-drenched and visceral activities slowly unfold, the characters getting themselves into deeper and deeper trouble, even if they’re trying to escape or improve the situation. This book has all the violence of a Tarantino film. At times it is almost overwhelming; you become inured to one more act of treachery and bloodshed, but then I think that might be the point that Hobson is driving home: the unremitting brutality of aggression and payback, the vicious cycle of abuse and cruelty, the impossibility of reprieve for those individuals – and those families – caught in the cycle and unable to see a way out, other than to commit more violence. There is a lot of killing in this book; a lot of dead things (both animal and human). That will sit uncomfortably with some readers. But for others, it will be a reflection of what they know, or what they have known in the past – anxious anticipation, dread, doubt, self-loathing, and a sickly fear of what the people in your life or in your immediate orbit might be capable of, and even worse, what you might be capable of in return.

The narrative is almost tragic in its simplicity: Vernon and Pen Moore have disowned their son Caleb and never want to see him again after the violence he enacted on his wife. But when they discover he is being bashed in prison by a thug from a local crime family, and that endemic corruption is ensuring a blind eye is turned, their parental instincts kick in and Vernon is determined to negotiate his way through the situation in a civil manner. But every move he makes only seems to make matters worse. Respect and decency are thin on the ground, especially when gangsters from the city are involved.

The story is told from several points of view but the common thread is the enactment of vengeance and revenge. We hear mostly from Vernon Moore and his son Caleb. We hear from Sidney Cahill (one of the sons of the crime family), who is trying his best to escape the life that appears to be laid out for him, his wife and his young daughter. We get the perspective of Sharon Wornkin, corrupt local cop with connections both personal and professional with the Cahill family. The fact that we only have two chapters from Brendan Cahill (Sidney’s brother), and only one from Penelope (Caleb’s mother), felt a little uneven. I would have liked more consistency across the viewpoints of all characters, and more depth or drilling down into some of the characters, particularly Reverend Kelly and the guys from Melbourne; there is scope for the novel to unpack the motivations and history behind their actions. I found the plausibility of some of the plot stretched and a little overworked. The overt violence in this story made me want to take a shower after reading it. But perhaps that was the author’s intention. It is certainly gritty, confronting and ugly; unrelenting violence and the enactment of revenge. And as I noted earlier, the raw and visceral brutality of this book might – for some readers – be less surprising, and more of a reflection of what actually goes in in their own lives.

But balancing this cruelty is the fact that, as readers, we are privy to the moral centre of almost every character. Even the very worst characters debate the ethics of their actions. Again, I’m not sure if this is realistic, but it certainly constitutes welcome moments of light against the sustained darkness. Every reader will take something different from this book, but the author’s central question is clear: How far would you go to protect the ones you love?

These are deeply flawed, mostly dislikeable characters that conduct themselves monstrously and with little regard to the feelings of others. But every so often, out of the muck, a characters will voice a regret, ponder a moral dilemma, question where their life is heading, or try to understand another’s point of view, and it is these moments of uncertainty that make the characters more real and empathetic. I have a particular soft spot for Vernon, who faces up to the difficult choices he has made in relation to cutting off contact with his son, and tries to fix things in an honourable and civil way, only to dig himself deeper and deeper into a hole of mistrust, nefarious activities and revenge. Despite feeling a bit like I’d been hit over the head myself with this book, I can see Ben Hobson’s intention: an exploration of how violence begets violence, the cycle of revenge, the risks we are willing to take for those we love, and the difficulties faced by those entrenched in a sustained system of abuse and vengeance.