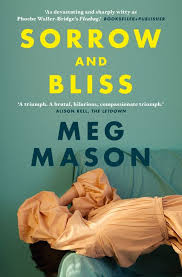 As soon as I heard Meg Mason’s new novel described as ‘Fleabag in a book’, I knew I wanted to read Sorrow and Bliss (4th Estate Harper Collins 2020). And this sharp, darkly hilarious, endlessly insightful writing, this heart-breaking dissection of a marriage, this poignant years-long examination of mental health and the consequences of labels, diagnoses and misdiagnoses, this highly original story, entirely lives up to the hype.

The voice of the protagonist, Martha, is so distinct and relatable from the very first page. The characters are well-drawn and complex; they have depths and inconsistencies, flaws and unexpected tenderness. The plot – basically the story of Martha’s life – is absolutely full of self-examination, self-doubt, existential wonderings and angst, and yet her original voice, the witty dialogue, the outstanding writing, elevates it to something far beyond the everyday navel-gazing novel that seems to be so common or so much in vogue at the moment.

The story is about Martha, from when she is an adolescent to when she is 40 years old. She grows up believing certain things about herself, about who she is, how she goes in the world, why her emotional reactions are the way they are, why and how she reacts to other people the way that she does. Her adult life is beset by thoughts, beliefs and self-fulfilling prophecies that, for various reasons, she has come to accept as the truth. And because there are many aspects of herself and her behaviour that she doesn’t like, she has spent many years either trying to explain her behaviour, or justify her behaviour, or sometimes even to change her behaviour to something more appetising. Some of her closest friends and relatives try to understand her unusual ways, some try to help her help herself, others ignore her actions in the hope they’ll go away. But although they all love her, either conditionally or unconditionally, they can all see the good that she is unable to see in herself.

I was fully invested in this story and in Martha from the first pages. The emotional trauma, the intense feelings, the quirkiness and the sadness are all beautifully balanced with the hopeful optimism, the forgiveness, the humour and the tenderness. Martha’s relationship with her sister Ingrid, with their parents, with her romantic entanglements … all evoke such complexity, such strangeness, such finely attenuated emotional observation. This is a book that asks all the questions that we feel too embarrassed or stupid to ask ourselves. It expresses opinions or interpretations that seem glaringly obvious and yet we would never dare to voice, despite our curiosity. Like the main character in Fleabag, Martha’s life is deconstructed, put under the microscope, pulled apart and then glued together again. The cracks still show, and we’ve seen the pressure points and the weak spots. But we’ve also glimpsed the structural integrity it has taken to hold this life together for so long.

This is a very compassionate and empathetic story – by the end, I had encountered an entirely new perspective not only on mental illness but on the choices and decisions made by people affected and those around them. So much makes sense on so many levels. The dysfunction of families is repeatedly revisited.

Occasionally a passage will consist of only one or two lines, one simple observation, so sharp and clever that it made me physically stop and stare into space while I digested the multilayered meaning of what I had just read.

Sorrow and Bliss is full of both of these things in the title; it’s perceptive and funny and endearing and thought-provoking. And it achieves what all good books do, or set out to do: to broaden the readers’ comprehension, to assist them to walk in the shoes of another, to shine a light around a darkened room and discover things that have always been there, but have remained hidden or unseen.