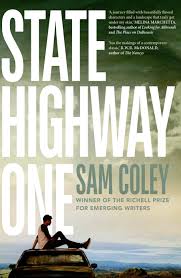 State Highway One (Hachette 2020), by writer Sam Coley, won the Richell Prize for Emerging Writers in 2017 and from the opening pages you can immediately see why.

The entire book is basically a road trip (both literal and emotional) for protagonist Alex and his twin sister Amy after the sudden death of their parents in a tragic accident. Set in New Zealand, the pair travel from the very northern tip of New Zealand, Cape Reinga, all the way along State Highway One (with a few detours along the way), to Stewart Island in the very south. It is a journey that makes no sense – they undertake it with little planning or resources, or without even really a motivation or goal. It is a profoundly emotional decision to embark on the road, sparked by the loss of their parents, and fuelled by their crazy, inexplicable (even to themselves) justification for doing it.

Alex had escaped from New Zealand to work overseas three years earlier, and plans to come home for only a few weeks, for the funerals and to finalise the estate. But his sister persuades him to undertake this journey, together, as a final mark of … something … respect? Friendship? Their relationship? Honouring their parents? Closure? As the road trip continues, the motivations shift and the balance between the twins changes, although it has always been Amy who is ‘the boss’ and Alex who goes along with her decisions.

Despite poor (or practically no) planning, they travel the road, experiencing various dramas and tests of character along the way. They fight, they make up. They recall childhood experiences. They reconnect in a way perhaps neither thought possible. As it becomes increasingly obvious that they will probably not reach their objective with enough time for Alex to still catch his flight back to his new work and home overseas, they must make some tough decisions. Alex particularly must ‘reckon with what coming home really means’.

If every good action book includes a car chase, this road trip is one big, tense road trip with rising tension that never lets up. The narrative arc is clear in terms of setting – a map at the beginning of the book plots points (towns etc) that they reach along the way, and the reader has a clear sense of how far they have travelled and how far they have yet to go. There is no going back, emotionally or physically.

Both the main characters are intensely drawn and compelling, each with a sparkling sense of humour and wit that balances the depressing nature of the reason for their trip, and their recent terrible loss.

The trip occurs around February 2015 and each chapter is dated. There are flashback chapters included (also dated) that broaden the sense of history and backstory for each character and their shared family circumstances. Themes of loyalty and betrayal, love and loss, grief and forgiveness, adventure, risk-taking, self-belief and self-doubt all feature.

There is something very special about this book. Something that I cannot even name as a literary device because to allude to it in words would possibly alert the reader and act as a spoiler. So I will simply say that when I reached the end of the novel, I wanted to go back and read it again from the beginning, knowing what I did not know then. The ending is spectacular.