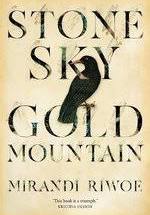 Stone Sky Gold Mountain (UQP 2020) is the latest work by author Mirandi Riwoe, whose stunning novella The Fish Girl (shortlisted for The Stella Prize) subverted a traditional narrative in a retelling from the perspective of a character normally silenced. In her new novel, Riwoe again focuses on the stories of those who historically have not had their voices heard in the dominant narrative. The result is a well-crafted, beautifully written, character-driven story that immerses us deep into Australia of another era and acquaints us intimately with those the history books have largely ignored, or who have otherwise been written as tired tropes or stereotypes.

Stone Sky Gold Mountain is a literary novel: every sentence sings from the page; the imagery is evocative and lingering; the characters are dynamic and authentic; the landscape is rich and detailed and familiar; and Riwoe allows the reader space on the page, in between the words, to imagine what she has left absent. So many issues in this book – the loss of a child, the madness of grief, the weight of responsibility, the trauma of our indigenous people – are hinted at in subtle and tangential ways, so that we find ourselves reading perhaps only one simple line that stops us in our tracks and forces us to really think about what is not being said. The lives depicted and the history recounted make for thought-provoking and sometimes uncomfortable and confronting reading.

And yet despite its beautiful prose and tender themes, this book is also very accessible and readable. The story is well-paced and filled with tension and engaging sub-plots. Although set 150 years ago, the characters have a familiarity and resonance that is warm and compelling.

The book features three main characters, with rotating chapters from each of their perspectives. Set in 1877, Chinese siblings Ying and Lai Yue are forced to flee their homeland and travel to Australia during the Gold Rush to try to make their fortune and fulfil their familial obligations. But their dreams of wealth and success prove to be rather different to the tough life on the goldfields, and they must abandon their diggings and move to the small township of Maytown in northern Queensland. Ying finds a job with a local Chinese merchant, while Lai Yue becomes cook and carrier on an overland expedition. Each must face their own demons: Lai Yue wrestling with the ghosts of his past, and Ying forced to endure a fake identity to remain invisible in the town. The third main character, Meriem, is a young white woman with her own tragic past. She works as companion/housemaid with a local prostitute and seems forever doomed to remain on the bottom rung of the social ladder. When she and Ying become unlikely friends, they both reconsider their ambitions and hopes.

A serious assault is committed in Maytown, and suspicion naturally falls on anyone who is considered an outsider. Fears are heightened and threats are made as the local white thugs bully anyone who is not like them.

The themes in this novel run like deep seams of gold: the pain and loss of exile from your homeland and your family; the sense of exclusion from an unaccepting and intolerant society; the relief of the feeling of belonging and connection. The book unflinchingly explores difficult issues such as the discrimination of non-white migrants to this country, particularly the Chinese, and the horrific history of invasion, violent massacres, stolen land and the disrespect of Australia’s first peoples. But all of this is handled with such a light touch. At the very beginning of the novel, Ying is bemoaning the fact that the local river is no longer home to the number of fish that she has heard were prevalent years earlier; as she senses a ‘dark figure shift in the shadows of the gums’, she wonders if ‘they miss their fish’. These small yet telling moments of insight into what the indigenous population has lost, or what has been taken from them, are poignant, especially when they come from an ethnic group that is itself discriminated against.

Stone Sky Gold Mountain is a complex web of complicated interpersonal relationships, each with their own obligations, loyalties, demands, pressures and rewards. We are drawn intimately into the emotions and feelings of these characters, and their motivations and behaviour seem entirely comprehensible. Riwoe demonstrates an astute sensitivity to the nuanced roles of the various people or groups in that era and enables us to see from their perspectives. The assault of colonisation is butted up against the rigidity of racism. In the epithet, Riwoe quotes Jan Chin in a letter to his father in 1858: ‘I wish to inform you that they are only strangers in this land themselves. Many of them have only been here a few moons, and none for more than one or two generations.’ It must have been very strange indeed for Chinese people – with their rich and ancient history – to understand the attitudes of white people (then resident in Australia for a handful of years) towards our indigenous people who had, like the Chinese, lived in a stable and unbroken civilisation for generations. The whites did not like the Aboriginal people they were trying to displace, nor the Chinese people they failed to welcome. The irony is not lost in this story.

Readers will become very attached and connected to Ying, Lai Yue and Meriem, and increasingly concerned for their fates as the novel picks up pace towards its conclusion. Each are facing challenging circumstances … how will each of them respond?