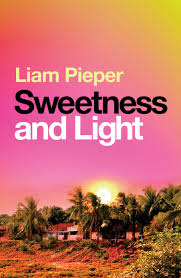 Sweetness and Light (Penguin Hamish Hamilton 2020), the new novel by Liam Pieper, is an absurdly good rendering of characterisation blended with a compelling plot that manages to cover themes as broad as globalisation and poverty, romance and desire, disadvantage, the drug culture and the addiction of cults, white privilege, betrayal, nature versus nurture, abuse, family dysfunction and a stream of consciousness search for identity.

In Parts One and Two, we are introduced to two main characters. Connor is an Australian expat with a tragic and brutal past, who has spent years living on foreign soil in India taking tourists on dive trips but mostly fleecing them in a long-running series of low-level scams and grifts. He is two-faced and suspicious, untrustworthy and cagey; and yet, when we hear his backstory, we gain a greater understanding of the forces that have shaped him.

In Part Two we meet Sascha, an American woman on a pilgrimage to search for spiritual enlightenment. She is determined to find it in a particular isolated ashram run by a famous guru, a seemingly utopian community that offers everything she is looking for. Sascha is perhaps more likeable than Connor, but she too has secrets and a dark history.

These two lost souls inevitably come together in Part Three. As readers, we know it’s coming, we know that their trajectories are on course to collide, and we fear for what will happen when they do. Their subsequent relationship is fraught – full of lust and desire but also distrust and cynicism. Their casual affair seems on the surface to be everything they could hope and expect from an expat dalliance far from home, in a place where nobody knows anything about their pasts, a place where they are free to reinvent themselves and to become new. But underneath, their histories are always there, simmering, tensions ready to explode at any time. And when they become involved with drugs, criminal gangs and locals with hidden agendas, the precarious balance of their union becomes even more unstable and unreliable. Can they trust each other? Can they trust themselves?

Nobody in this novel is black and white; everyone is a different shade of grey. The characters’ dislikeable – sometimes even abominable – behaviour makes us cringe, and yet when more of their backstory (often abusive) is revealed, we wonder if that gives them a pass. This book poses some big ethical questions about moral ambiguity and about who gets to decide what is right and what is wrong. The high moral ground of Western society’s rules isn’t always applicable to a country faced with poverty, corruption and disadvantage.

When the ending to this story comes, it is like a solid punch to the guts. Rarely have I felt so blindsided by the concluding pages of a book. This is exactly the sort of story I love – one heavy with ambiguity and chance, one that leaves much to the reader’s imagination. But even so, the ending affected me so deeply that I sat with it for some time, thinking through the possibilities of what I had read, trying to parse the meaning, trying to foresee what might have happened next, after the last page.

For a lot of this book, I felt a kind of revulsion, a dirtiness, a shame at how the characters were behaving. And yet, somehow the author manages to very cleverly control this by revealing enough of their childhoods and past experiences that they became comprehensible to me, even if deeply flawed. I felt deliciously betrayed, subtly trapped, quietly cornered. A remarkable story.