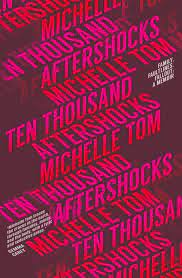 Ten Thousand Aftershocks (4th Estate Harper Collins 2021) is a powerful and moving memoir. Debut author Michelle Tom writes of her fractured family, the force and devastation of earthquakes, and the fallout and aftermath of both, with skilled prose, evocative descriptions of place and sensations, and a harrowing family narrative that she felt should no longer be silenced.

The book is dedicated to her brother and her sister, who both died too young, amidst the shame and secrets of an abusive home. Tom, who no doubt has survivor guilt not only about being the only remaining sibling, but also about escaping the Christchurch earthquake, bares open her feelings in an emotional recount that is sometimes uncomfortable to read, but all the more compelling because of its content. This is a story of seismic proportions; strap yourselves in.

The most obvious feature of this book at first glance is the unusual structure. Tom has divided the writing into five sections which mimic the five stages of an earthquake and its aftershocks. But in addition, every short, sharp scene is a small vignette – a perfectly formed, complete mini-story in itself. It might be a memory, an observation, a piece of research or a conversation. Each is set in a random time – 2018, 2013, 1969, 1992, 1967, 1980 – all mixed up together so that we never know which part of her life we will read next. Each has a snappy title: The Scream, Diagnosis, Sisters, The Poet, Warning Shot, The Second to Last Time, Hero, Escape, Rage, A Promise, Birth Order, Do You Like it Here? Every short passage – sometimes less than a page, sometimes a few pages long – anchors us in a specific time and place in the story and in her memory, and completely immerses us in that particular moment.

But the strength of this book lies in its story and the intimate voice in which it is told. Michelle Tom’s house was ‘fatally’ damaged by the 6.3 magnitude earthquake which struck Christchurch in New Zealand in 2011. The aftershocks numbered approximately 10 000. That number mirrors the chaos and trauma of her early life. Soon after relocating her family to Melbourne after the quake, Tom receives news that her estranged sister is dying. She flies back ‘home’ to the memories of her father and brother, already departed, and her sister and mother, with whom she shares a strange, enmeshed and unhealthy relationship full of childhood secrets. This book has a lot of triggering content – her sister has a terminal illness, her brother suffered schizophrenia and ultimately committed suicide, Tom herself is beset by a desperate panic disorder, and the three siblings share the abusive upbringing of a violent and often rage-filled father, and a mother who is so difficult, so eccentric, so willing to sacrifice her children to save herself, that Tom eventually decides the only way forward to peace in her life is parental estrangement. This is not something contemplated lightly, and it is through the thousands of small cuts that we see the tragedy unfold. (The Erratics told a similar narrative memoir of a cold and difficult mother.)

With insight and perception, Tom dissects her childhood, her choices, her adult decisions, her vulnerabilities, her shame, her guilt, her concession to failings of her own, and her desperate attempts to understand and forgive members of her family who quite patently did the wrong thing. Even in the face of obvious betrayal and malice, Tom manages to cling firmly to her own family of choice – her husband and children – vowing to be a different sort of parent and partner, despite her history. This memoir is her effort to articulate and understand what she and her siblings went through, and how and why her parents made the choices they did. In the end, she sounds not bitter, but wise. She has learned enormous lessons from her chaotic life and the tragedies she has witnessed or endured. She has written them down in an attempt to comprehend the patterns, the history, the legacy of trauma.

Although this is a dark book with content that is often distressing, the voice is poetic and lyrical, the narrative easy to read and compelling. The fractured collage structure allows us to move swiftly from one memory to another; to go from light to dark and back to light again, so it never feels heavy or too unbearable a burden.

This is a brave book. A memoir of understanding. A call to others who might find themselves in similar situations. As Tom says: ‘The key to the present was [is] in the past.’

Around the time of the book’s release, Melbourne suffered a significant earthquake (an unusual event for that city). While it is frivolous to believe this was the publishers organising a spectacular marketing campaign, it could also be a karmic sign, a great shift in the earth where Tom and her family now live, perhaps to commemorate the emergence and significance of this story, to mark it as literally shocking. Whatever the case, it was a fitting beginning to this book’s journey, which I think will touch many people.