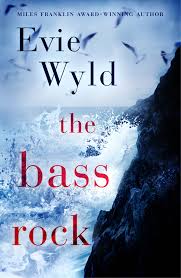 Miles Franklin Award-winning author Evie Wyld (All the Birds, Singing) returns with her novel The Bass Rock (Vintage Penguin Random House 2020), a stunning literary multi-generational narrative about trauma, psychological abuse, and most particularly the violent abuses of men across the ages.

This is a bleak and very sad novel. As it charts the lives of three women from different centuries, it emphasises the familiar echoes of power, control, abuse, violence, expectation, indifference and fear that have often characterised the dynamics of relationships. With its complex structure and complicated narrative form, and an ambiguous ending, the novel is crushing, expansive, dark, angry, unsettling and compelling.

The commonality between the three strands of the story is the setting: the Bass Rock, a solid black immovable stone that surges from the sea off the coast of the Scottish mainland, keeping watch over the fates of women over the centuries. And while the three women each have their own story in their own time period, all three are linked, sometimes in obvious ways, and sometimes by subtle threads. What they share, besides Bass Rock, are the struggles of women the world over to remain steadfast in the face of powerful men, cruel men; men full of expectations and pride.

Sarah is the earliest character and the one we hear the least about, but she is nevertheless a crucial part of the puzzle. In Scotland in the early 1700’s, Sarah is accused of being a witch, and she flees for her life. The journey she undertakes with a ragtag assembly of a stranger’s family is fraught, dangerous, beguiling, anxious and almost mythical.

The second character, Ruth, comes to us in the aftermath of the Second World War, as she navigates a new husband, a new family, a new home and a new community. Her differences set her apart and she struggles to align her individual identity with what is expected of her as a wife and mother. The casual sexual dominance wielded by local men distresses her but she cannot think how to escape from her situation, or whether that is even what she wants.

Set in the modern day, the third character Viv is mourning the death of her father and clearing up the family home – where Ruth once lived, six decades before – to ready it for sale. As she considers her own circumstances, discovers possessions belonging to her ancestors, makes strange new friendships and attempts to find purpose in her own life, Viv picks the scabs off the wounds of the past, and faces unexpected truths.

Woven throughout are four or five short, sharp sections, seemingly completely unrelated, concerning several individual women and their experiences of violence or abuse or control. These passages serve to highlight the escalating themes of the novel, and as the story progresses, an awareness of the very profound messages the author is exploring begins to become more and more visible, like a partially completed jigsaw becoming more recognisable with each added piece. This is a book about the sisterhood of women, the ways in which men hold sway over women’s lives, and women’s searches for self-identity, self-esteem, independence, love, fidelity and safety. It is about women making decisions for themselves, about themselves. It is shocking in its depiction of violence and subordination and subjugation of women by men over the ages, and persistent in its description of women as determined, feisty, quietly rebellious or overtly oppositional.

Because there are three narratives, plus the short interspersed sections, and so many characters, it does take a while to work out who is related to whom, and to orient yourself at the beginning of each chapter regarding what time period we are now reading about and which characters are now children, now adults, now historical figures, now present-day. This can be a tad disconcerting but it is true to Evie Wyld’s style. Instead of becoming frustrated by the lack of a linear narrative, or by the jumping around in time zones, the reader is forced to go with the flow, content to know that there is much we don’t know, and won’t know, until the author chooses to reveal it. Once you accustom yourself with the fact that the story is ethereal and rarely self-explanatory, and you surrender to the giddy sense of discovery, you fall into a pattern of reading, where the details of who is who appear to become less important than the overall message and themes that the author is canvassing. And the hint of a ghost girl adds to the magic. I highly recommend this book.