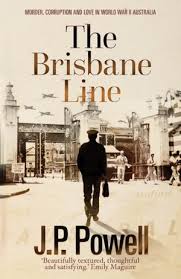 An historical crime mystery set in wartime Brisbane, J.P. Powell’s The Brisbane Line (Brio Books 2020) is a tale of murder, corruption, art and love during a week in late 1943, featuring a handful of real-life people combined with fictional characters in a familiar landscape. The main protagonist, Sergeant Joe Washington, is a United States Military Policeman who loves music and photography but is responsible for investigating the many petty and sometimes sordid and serious crimes committed by the American troops stationed in town.

Known as the Garrison Town, Brisbane was flooded with thousands of ‘Yank’ soldiers at that time, causing many small skirmishes and local ‘misunderstandings’ and of course much larger conflicts such as The Battle of Brisbane, where soldiers from each side were pitted against each other in a clash of cultures surrounding who had the most cash, who got the most girls, who was most handsome in uniform and who held the most sway.

The Trocadero and the Carver Club, the Office of the American Provost Marshall, the Lyceum Club, the Courier-Mail, the Tower Mill, Customs House – all feature as backdrop to the action, as Powell enthusiastically and meticulously recreates Brisbane past.

Frank Bischof, the notorious Police Commissioner known for his illicit backroom deals, corruption, standover tactics and criminal connections, is fleshed out in a fictional way that feels entirely believable.

The literary community of the time also features strongly. Thea Astley and Judith Wright (among others) make an appearance, as does the literary journal Meanjin Papers which was founded in 1940, and the journal Senior Tabloid (later known as Barjai), first written and produced by senior students of Brisbane State High in 1943. The author has very cleverly woven these true facts, actual places, real-life events and well-known people into this fictional tale in a way that provides the kind of authenticity that normally accompanies true crime or historical / memoir writing. The amount of detail regarding real places, as well as foods, clothing, vehicles, past-times, music and the literary scene of the time has obviously been well-researched and it is no surprise that the author is an historian and an archaeologist.

The book explores the attitudes of the time including racism, sexism, homophobia, police corruption, class snobbery, and anger and mistrust towards foreigners.

I found the first half of the book the most compelling, with the ending also satisfying, but the story perhaps slowing a little in the middle. A complex plot with many subplots and a host of characters at times got a little confusing, but the author does bring it all together again towards the end, and leaves the story with the possibility of future adventures by Joe Washington, perhaps in other novels. I did really enjoy the familiarity of Brisbane and Queensland depicted throughout the book – the weather, the flora and fauna, the colloquial language, the names of streets and suburbs and local landmarks, many of which still stand today. And I appreciated the meticulous attention Powell pays to the authenticity of dialogue, and the morals and behaviour of the time, as if she has captured a snapshot of 1943 Brisbane and allowed it to develop fully before our eyes as the novel progresses.

If you enjoyed Melanie Myers’ award-winning novel Meet Me at Lennons, The Brisbane Line will be of similar appeal. And if you’ve read Matt Condon’s trilogy of true-crime accounts of Queensland’s political, judicial and policing history, this will encapsulate the fact with the addition of imagined but quite plausible fiction.