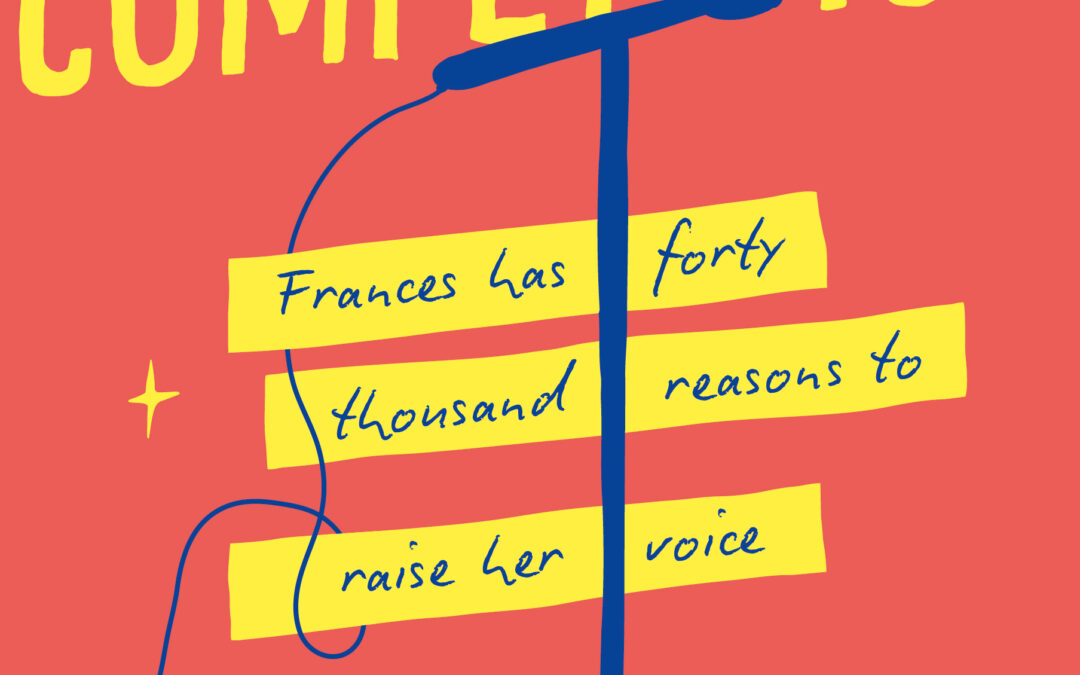 It’s rare to discover a book that is hilarious, well-written AND contains a compelling message, but Katherine Collette has done it again in her second novel The Competition (Text Publishing 2022), a funny, tender, vulnerable and thoughtful story about a young woman who must voice her thoughts to others in order to speak to herself.

Set in the dog-eat-dog world of competitive public speaking, the book is centred on an organisation called SpeechMakers, a thinly-veiled copy of the very popular worldwide ToastMasters body. Collette has done her research (including attending a three-day ToastMasters conference in the US) and highlighted all the best bits of this organisation while adding her own – fictional and very funny – downsides. In combination with a cast of engaging (and sometimes quite annoying) characters, this has resulted in an easy to read and lighthearted narrative that is comical, facetious, moving, touching and warm.

The set-up is simple. Frances is supposed to be at work behind the deli counter at her local supermarket but instead she is competing in the annual SpeechMakers national conference and competition, not because she has any great interest in public-speaking, but because for the first time, this year there is $40 000 prize money, and that would go a long way to solving some of her irritating problems. Her mentor (or ex-mentor, because apparently he is no longer speaking to her), is Keith, a long-time devotee of SpeechMakers who is not only supposed to be mentoring Frances, and competing himself, but is also disillusioned with the organisation’s current focus on profit and self-enrichment rather than altruistic self-improvement. He also hopes – as he does every year – that his success might help his troubled relationship with his wife, Linda. Doctor Neil (not really a doctor) is only competing because he thinks he owes his mother, Judy, who is a fanatical SpeechMakers coach with a side hustle in branded handicrafts, and Rebecca is someone from Frances’ past whose unexpected presence causes Frances no end of discomfort. A keenly observed story filled with a compelling cast of overachievers, underachievers and wannabe achievers, The Competition is a thoroughly enjoyable rollercoaster of hilarity.

I began this review by commenting on three aspects: the humour, the writing and the message, and how rare it is to find all three sitting comfortably side by side in a novel. Funny writing is notoriously difficult to pull off; it’s much easier to write pathos. Collette achieves comedic writing by combining wit, absurdity and satire to create characters with disturbing and achingly funny traits and dropping them in a setting that is itself full of complex opportunities for misunderstandings, competitiveness, revenge, greed, ambition and vulnerability. Anyone who has ever sat on a P and C board, a tuckshop committee or any other vaguely non-profit organisation that seems to thrive on its own enhanced view of itself and the concomitant perceived elevation of the stature of its members, will recognise the bureaucracy, the red tape, the written and unwritten rules, the power imbalances, the ongoing tussles over roles and positions, and the utter obsession of some people towards the organisation they love. Collette depicts this strange world within a world with insight and perception, through a comedic lens.

The second aspect is the writing. It is easy to assume a lighthearted book might be a lightweight read, or not as perfectly crafted, but this novel proves the opposite. Razor-sharp dialogue, great description and considered attention to the particulars of each of the characters and their backstories make The Competition a highly enjoyable and satisfying read. Like other books published by Text in a similar genre (especially The Rosie Project by Graeme Simsion), readers will not only identify with the characters but also be delighted by the quality of the writing.

And thirdly, the message. While it would be easy to write a funny novel that was just that and no more, Collette has seamlessly incorporated several thought-provoking and serious issues that add poignancy, pathos and meaning to this story. The relationship between Neil and his mum is recognisable and affecting. Keith’s manner is vexingly frustrating but covers a veneer of vulnerability. Some of the other characters – Edith, Roger, Susan – are all funny but moving and recognisable caricatures. And Frances herself – the heroine of the book – goes on a journey that even she would not have expected in her wildest dreams. Forced to confront her past through her old friend Rebecca, Frances exposes questions about motivations, childhood bad behaviour, lies, friendships, regret, recognition of a wrong and making amends. She (and the reader) uncovers a distasteful side of herself that she would rather remain hidden, and yet in doing so, she becomes even more comprehensible and strangely likeable despite – or perhaps because of – her dislikeable characteristics.

And rather than ending with all these competing themes resolving, the narrative finishes on a more realistic note, with characters changed but not completely, and behaviour addressed but not to everyone’s satisfaction.

The Competition begins as a story about public speaking and rules and competitiveness, but it ends with a thoughtful meditation on personal and public ambition, friendship, self-forgiveness and challenges.