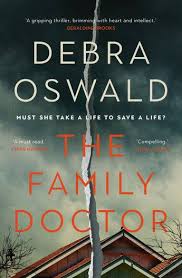 From screenwriter, playwright and author Debra Oswald comes a new novel The Family Doctor (Allen and Unwin 2021), a thought-provoking and suspenseful tale about domestic violence, love, grief, and women’s friendship and their fury. This book asks the questions: ‘Can a good person justify taking a life to save a life? Should you cling to faith in a flawed system, or take control the only way you can?’

Paula, Stacey and Anita have been friends since childhood. Now in their mid to late thirties, they have shared heartache, new love, loss, new life and trauma. Their friendship is solid and unwavering. Paula is a suburban GP still grieving her husband, gone too soon. Stacey has two adorable young children but is isolated on a rural property with an abusive husband. Anita is a court journalist navigating a new relationship. Stacey and her children come to stay with Paula to escape her estranged husband but in a shocking opening scene he murders them in Paula’s home. Paula is unable to live with the guilt she feels that she couldn’t do more to save them, that she missed the signs, that she wasn’t there when her friend needed her. She is also angry, full of rage at the violence inflicted against women. Anita is also devastated by their friend’s death and feeling impotent to do anything to stop the system from failing women.

Two other situations become prominent in the story. One is the circumstance of Rochelle, a patient who comes into Paula’s practice with her young son. Paula immediately detects the tell-tale signs of abuse and struggles with how to help Rochelle when it is clear the mother wants only to let sleeping dogs lie. The second situation is the very public trial of a man named Santino, charged with throwing his partner off a bridge. The defence argues that he was trying to prevent her from jumping. Santino’s very pregnant new partner attends the trial every day, along with his sister and other family members. Anita is covering the trial, disturbed by the similarities or commonalities between the Santino case and her friend Stacey.

Then Paula goes rogue, going against everything she believes in, everything she has trained for, to make sure she saves one woman and spares one child. But in attempting to prevent a tragedy, how far is she prepared to go? How elastic will her moral band be? Paula’s choices and actions haunt her, and she becomes hopelessly mired in an ethical dilemma. And when Anita becomes involved, each woman must try to live with her conscience after what she has done or hasn’t done, or what she knows.

Debra Oswald says the novel is ‘inspired by real stories’ and ‘springs from my anguish about violence against women, the impotent rage many of us feel when we hear that yet another woman and her kids have been killed…I think [this fictional story] can carry some of that intense feeling’.

I love this conversation between Paula and Rochelle:

‘Don’t waste emotional energy feeling guilty, Rochelle. You’re a brave person and a loving mother who did the best she could in an impossible situation.’

‘The thing is,’ Rochelle said, ‘when you’ve been in a situation for so long, it feels like that’s normal life – well, even if you know it’s not normal, it’s how things are. But then something changes and it’s like, “I remember this! This is what safe feels like.”’

Gripping, riveting and page-turning as a thriller, this novel is also thoughtful, curious and will provoke much discussion amongst readers about right and wrong, the law and justice, punishment and revenge, safety and risk, and the ethics of taking matters into your own hands if the police or legal systems are failing you.