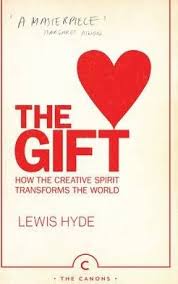 The Gift is a non-fiction book first published by Lewis Hyde in 1979; my edition was published by Canongate Books in 2012. With a foreword by Margaret Atwood, who calls it quite simply ‘a masterpiece’, The Gift is a treatise on ‘How the Creative Spirit Transforms the World’. It argues of the ‘importance of creativity in our increasingly money-driven society’, and references psychology, anthropology, fairy tales and folklore, literature and art in its exploration of the idea of gifts and how they can and do ‘inspire and change our lives’.

This is a dense read that requires concentration and time to digest. While it may be read for pleasure or interest, it is also a book that would sit well on a research curriculum. As Zadie Smith says, the book is ‘A manifesto … for anyone who makes art, cares for it and understands that our most precious possessions are not for sale and the greatest contracts are achieved without anyone signing on the dotted line’. Hyde is a critical cultural thinker and observer who examines aspiration and creativity versus ‘selling out’ to material success (although he certainly believes that artists should make a living); he unravels the mystery of the market versus the freely given; he deconstructs the idea of what a gift really is, the spirit in which it is given and received, and the meaning of its passing from one hand to another.

Margaret Atwood states: ‘Gifts pass from hand to hand: they endure through such transmission, as every time a gift is given it is enlivened and regenerated through the new spiritual life it engenders both in the giver and in the receiver. And so it is with Lewis Hyde’s classic study of gift-giving and its relationship to art.’ The Gift, which has never been out of print, offers solace and inspiration to artists about the core nature of the work they make, and why that work matters – whether it is something you ‘write, paint, sing, compose, act or make films’ – not as a means of a commercial entity that may be bought and sold, but as a definitive artistic creation that exists purely for its own sake. And when that art is gifted to another, its value is enhanced and its importance magnified.

Hyde covers many topics in his curious approach to gifts. He examines the history of gifts and gift-giving, from primitive tribes centuries ago to modern cultural exchanges. He considers religion, economics, organ donation, marketing, etiquette guides, funeral and marriage rites, usury and cost-benefit analysis. In the first part of the book, he recounts many legends and folktales that underscore the rites of gift-giving. The second part of the book looks intimately at two poets, Walt Whitman and Ezra Pound, both of whom had contemplated the complicated entanglement of money and art, and references their contemporaries including Hemingway, Joyce, Eliot and Yeats. The book is updated both in the preface and the afterword, and current cultural references – the internet, social media platforms, copyright – are interrogated as to their evolving relationship with gifts, givers, receivers and the ability of art to transform and change.

Hyde says: ‘That art matters to us – which moves the heart, or revives the soul, or delights the senses, or offers courage for living, however we choose to describe the experience – that work is received by us as a gift is received. Even if we have paid a fee at the door of the museum or concert hall, when we are touched by a work of art something comes to us which has nothing to do with the price.’ He speaks of the artist’s work allowing us to see shapes, colours, words and meanings in our surroundings that we had not noticed before.

My friend Simon Cleary gifted me this book, and out of all the thousands of words, he highlighted first these: ‘The spirit of an artist’s gifts can wake our own.’ This is I believe the most poignant and true distillation of this book: that through the work created by others then gifted to us (whether or not money has changed hands), we are able to more clearly see our own potential and awaken our own sense of creativity. The beauty and cleverness of others inspires us. This is a theory to which I strongly subscribe: that the act of creation by others (not only ‘successful’ commercial work but merely the creation of art in any form) is fuel for our own creative life, and that the celebration of others’ art is in itself a gift, both to the artist, and to ourselves.

The second phrase my friend underlined was this: ‘… my concern is the gift we long for, the gift that, when it comes, speaks commandingly to the soul and irresistibly moves us.’

Copies of this book have for decades been gifted from one hand to another, as artists and creatives attempt to make sense of the meaning and matter of their work, and the gift that their work may offer the world, whether it is bartered or given freely, whether it is words or pictures or music, whether it is produced for others or created solely for the pleasure of its creator.