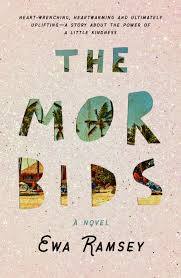 The Morbids (Allen and Unwin 2020) by Ewa Ramsey is, on a superficial level, a story about two female friends, love and romance, a typical 20-something tale of getting by and finding your place in the world. But anyone who reads this book will gradually realise that underneath that levity, there is a deeply thought out, carefully crafted and nuanced story about mental illness, relationship dynamics, self-esteem and self-identity, with an underlying profound philosophical exploration of grief, death, fear and loss.

The tone of this book is one of a descent into madness; what happens when an event, or a series of serious events, affects your psyche to the degree that you no longer have control over your thoughts or your behaviour, but instead are forced to survive through routines and habits bound up in magical thinking about what will save you from the worst that can happen.

While The Morbids is incredibly easy to read, and again on the surface quite an entertaining story, much darker themes run seamlessly through the narrative, giving us an entirely different reading experience than the overt story suggests.

The premise is simple: Caitlin is a normal young woman with career and travel plans. We find out much later that there was an incident in her youth that has affected her more than she has realised, but at the beginning, she doesn’t know that, and neither does the reader. So she is happily going about her life, planning to travel overseas with her best friend Lina, when she is involved in a fatal car accident that shakes her to her core and leaves her with the unshakeable feeling that she was not meant to survive, and that in fact death is just around the corner and could take her at any time.

She avoids these Thoughts (with a capital T) by drinking too much, working too hard and also attending a self-help support group for people who are also coping with death-related anxiety, a group informally known as The Morbids. This is a fascinating group of people of vastly different backgrounds, ages and genders. But they all share a constant and debilitating fear of death, a determined belief that it is a hair’s breadth away at any time. Some focus on industrial accidents or cancer, some on freak weather incidents or train derailments, some on choking or falling or being attacked by a stranger. But all of them are terrified, all the time, of what they are convinced is just around the corner – a sudden, inexplicable death, or even that they have an illness and are already slowly dying but are not yet aware of the cause.

The most fascinating part of this book is Caitlin’s gradual mental deconstruction, her inexorable mental decline, as she ruminates about her death, and does everything to avoid thinking about the impetus behind it. The Morbids is a study in severe anxiety and how it can affect someone to a crippling degree. Of course, this is one story about one person’s anxiety, and will not be a reflection or representative of everyone’s individual experience of anxiety, but I found Caitlin’s characterisation completely compelling. The visceral descriptions of her physical reaction to stress and anxiety, the vivid depiction of her wild, ruminating Thoughts, the way her anxiety reduces her to a small, vulnerable shadow, incapable of escaping or making decisions. Her body freezes, her mind is stuck in a never-ending loop of dark Thoughts.

This is one of the best books I’ve read that presents that experience of anxiety in such a fully-rounded, all-inclusive, immersive and comprehensible way. I could feel Caitlin’s fear. I could understand her sense of losing herself, her loss of control, her self-doubt and her bizarre desire to tempt fate by putting herself into the exact situations in which she feared death would occur, constantly testing herself, because she knows death is coming, and it is easier for her just to accept it so that the anxiety of its imminent arrival disperses. Ramsey has really nailed this heightened mental state and its effects.

But to balance this darkness, the story has the light-hearted overt narrative going on at the same time. Caitlin’s friend Lina is getting married, and Lina’s dreams of the perfect wedding and the new house and homemaking and settling down are the perfect balance to the darkness going on in Caitlin’s head. And Caitlin has her own tentative romance – she meets Tom, a handsome doctor, and while their on again / off again relationship flits delicately about, never landing on the one place for too long, it is clear they have a connection. It is Caitlin’s past and her anxiety and her Thoughts that keep her from committing to Tom or even allowing him into her life in any meaningful way. These two men – Tom, and Lina’s partner Matt – provide a degree of lightness to balance the weightiness of other issues. There are other characters too who provide life and light – Caitlin’s boss, Nic is a good example.

The other aspect of this book that I found admirable was Ramsey’s descriptions of desire, romance and young love. The physical, mental and emotional closeness that develops between Caitlin and Tom is written with exquisite care, sensitivity and sensuality. Every touch of a hand, every breath, every tentative kiss is laden with desire and yearning.

Sometimes it may seem easier not to live, especially when you fear death is waiting to grab you at any moment. Sometimes actual death seems the easier option than the constant anxiety of waiting for death. But despite exploring these dark themes, this book is also life-affirming and optimistic, with Caitlin and Lina both discovering that the past can be made to remain in the past, and that the future is something to embrace.