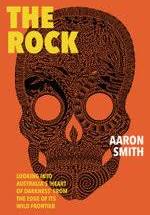 The Rock (Transit Lounge 2020) by Aaron Smith is subtitled: Looking into ‘Australia’s heart of darkness’ from the edge of its wild frontier, and the book certainly lives up to this promise.

Opening first with a quote from Oodgeroo Noonuccal: ‘Let no one say the past is dead. The past is all about us and within’, and also with a depiction of the four axioms of the bush: The Missionaries, The Murderers and Madmen, The Misfits and The Mercenaries, the book proper opens with the words ‘Fuck you. With all due respect, fuck you – yes, you, dear reader of this page. Fuck you Australia, lost in the Great Forgetting, the Great Unknowing, the Great Denial of your bloody heart of darkness.’ This gives you a sense of what you are in for – and it’s quite a ride.

Aaron Smith’s memoir of his time as the last editor of Australia’s most northerly newspaper, The Torres News, (a small, independent regional tabloid that operated for 63 years until it folded in 2019), gives a unique perspective on the cross-section of life as seen by a white Australian immersed in the culture of Torres Strait Islander and Aboriginal people. And what he sees is often uncomfortable and unpalatable. Racism is exposed as he is ‘transported from his white-boy privileged suburban life to being a racial and cultural minority, and an outsider’. Smith becomes completely immersed in local life and gains a fascinating perspective on the treatment of our northern countrypeople, the political games played with their lives, and the lack of resources available to them, resources that most of us take for granted in this country. As he pulls apart Australia’s issues and examines them from the inside out, he is outspoken, bold and confronting.

Covering everything and everyone from Mabo to Morrison, from Abbott to PNG, from traditional owners to indigenous history, from the media to community to an endless stream of political posturing, from stories of belonging and identity to protests and polls, from disenfranchised indigenous people to empowered Aboriginal leaders, from our shameful history to our shameful present, from stories that made the headlines to those that quietly slipped away unnoticed, from incarceration to inequality to government failures, this book highlights stories of the little people – the unknown characters – all the way to the famous cases that will be familiar to readers. This is a white man writing about indigenous issues, and some readers might take issue with that, but the fact remains that Smith lived and worked in community for six or seven years and has a fascinating and confronting perspective on the topical matters of the times.