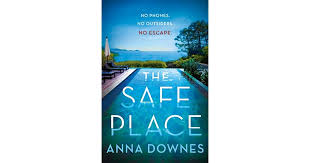 The debut novel by actress and author Anna Downes, The Safe Place, is another compelling psychological thriller published by Affirm Press (2020), with similar marketing and expectations to their crime writer Christian White (The Nowhere Child / The Wife and the Widow). With comparisons to the suspense of the international bestseller The Girl on the Train and a modern version of the gothic mystery of Rebecca, The Safe Place is a compulsively page-turning crime drama with a fast-paced plot, a tense narrative, well-drawn characters and a psychological mind-twist that will keep you guessing.

It is also quite beautifully written, with evocative description of place, authentic dialogue and the wonderful warm, witty and humorous internal monologue of the protagonist, Emily, who the reader walks beside every step of the way as she gets deeper and deeper into an apparent paradise with a sinister underbelly.

Emily Proudman is a great character, full of self-doubt and criticism, disappointment (with her family, with her job, with her acting aspirations) and sort of bumbling about in a lost kind of way, wondering what she should really be doing with her life. London is grey and depressing, so when her attractive boss offers her the opportunity to fulfil the role as live-in housekeeper/nanny/companion to his isolated wife and their troubled child on a luxurious estate on the coast of France, she practically jumps at the chance. Scott and Nina are glamorous, wealthy, sophisticated, warm and welcoming. Their daughter, Aurelia, is ephemeral and sweet. Utterly charmed, and unable to believe her good luck, Emily happily slips into her new role with barely a thought for what she has left behind. What could possibly go wrong?

Well, quite a lot actually. The longer she stays, and the more isolated Emily becomes, the more she begins to notice the cracks appear in the perfect family, their perfect home and their perfect life. While Nina in some ways becomes her best friend and confidante, she is also secretive and aloof, with strange habits and demands that Emily can’t quite pin down. Scott almost never makes an appearance, and when he does, things seem unnaturally bright. And Aurelia, apparently suffering from an unlabelled illness, exhibits aggressive behaviour, muteness and terrible nightmares, which don’t seem to fit with how much she is loved and cherished by her mother.

Downes does a great job of placing us well inside Emily’s head right from the start, as she expresses her incredulity and disbelief at her new-found fortunes, after her internal dialogue about how awful her life had become, and then how suddenly it changes; she is relatable and engaging. Some chapters are from Scott’s point of view, which is unexpected but particularly effective, as we are immediately in doubt as to who – if anyone – is the most reliable narrator. The linear narrative is punctuated by italicised passages from the perspective of somebody – we’re not clear who – and these add mystery and drama to the story as they gradually give away more information with each section.

The reveal comes earlier than expected and is followed by a resolution that involves not only the reader figuring out what has happened, but how it plays out after the reveal; again, slightly unexpected for this kind of novel. And the ending left me wondering if one of the main characters might make an appearance in a sequel; Downes has certainly left enough unanswered questions and unresolved secrets to follow up with another story.

This is an amazing debut – well-written, tight storyline, well-plotted and full of suspense – and will appeal to anyone who enjoys a gripping psychological thriller.